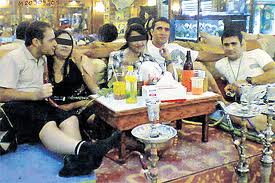 Thai police said Friday that they had identified a woman who said she and her two friends had partied with the three suspects last week while they were in Pattaya, a beach destination known for its rampant sex industry.

The woman, described as a prostitute in her twenties and identified only as Nan, said that she had spent time with one of the suspects, Mohammad Kharzei, and later had two of her friends join — one for each of Kharzei’s two cohorts, Masoud Sedaghatzadeh and Saied Moradi.

A cell phone photo taken by the woman and published by the Bangkok Post shows the three suspects lounging around a Hookah bar, embracing and kissing two women.

Nan said that the group drank and played snooker together, and that nothing seemed amiss, except when one of the men “barred her from approaching a closet” in their hotel room, according to the newspaper.

Thai authorities said they hope the woman can help tie the suspects together.

“What we got from Ms. Nan is circumstantial evidence that helps confirm to us that they were here together in Pattaya,” Thai immigration officer Thawatchai Nongbua told the Bangkok Post. While the Associated Press said that the men spent at least two nights in the resort town, the Bangkok Post said hotel records showed the men were in Pattaya through Monday night.

The suspects’ alleged plot was disrupted Tuesday when a cache of explosives detonated, apparently by accident, in a residence in downtown Bangkok where the men had been staying.

One of the suspects, Saeid Moradi, was wounded in the explosion. He ran to the street, covered in blood, and tried to hail a cab. When the vehicle wouldn’t stop for him, he allegedly hurled a grenade at it, injuring the driver. When Moradi allegedly threw a second grenade at police who had come to arrest him, the bomb bounced off a tree, exploding near him and taking off one of his legs. Four Thai nationals were injured in the explosions.

The other two suspects were arrested while trying to flee from Thailand; Sedaghatzadeh was arrested in Malaysia, allegedly on his way to Iran, and Kharzei was detained at the Bangkok airport.

Thai Police said Friday they were also seeking two other suspects. Police said they thought Leila Rohani, the woman believed to have rented the Bangkok house that was damaged, was already back in Iran. According to the AP, a police spokesman said the fifth suspect was a white-bearded 52-year-old of unspecified nationality named Javad Nikkhahfard, and said he was thought to be a bomb maker who might have trained the other men. All four men were seen leaving the Bangkok residence on a security camera.