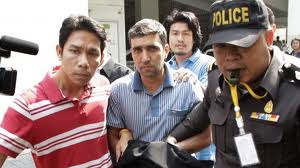 Thai police have paraded one of the men suspected of being responsible for explosions in Bangkok on Tuesday.

Mohammad Khazaei, 42, was flanked by police officers as he was taken through a group of photographers at a detention centre.

Two others are being held in custody, one of them in Malaysia.

A fourth suspect is still at large, believed by immigration officials to be back in Iran.