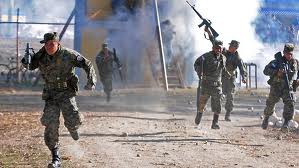 Honduran officials confirmed Wednesday that more than 358 people died when a fire tore through an overcrowded prison, making it the world’s deadliest prison fire in a century.

With 856 prisoners packed into barracks, the farm prison in the Comayagua province north of the capital was at double capacity, said Supreme Court Justice Richard Ordonez, who is leading the investigation.

Ordonez told The Associated Press the fire started in a barracks where 105 prisoners were bunked, and only four of them survived. Some 115 bodies have been sent to the morgue in the capital of Tegucigalpa.

The fire started by an inmate tore through the prison, burning and suffocating screaming men in their crowded barracks as rescuers desperately searched for keys to unlock the doors.

The local governor, who was once a prison employee, told reporters that an inmate called her moments before the blaze broke out and screamed: “I will set this place on fire and we are all going to die!”

Comayagua Gov. Paola Castro said she called the Red Cross and fire brigade immediately. But firefighters said they were kept outside for half an hour by guards who fired their guns in the air, thinking they had a riot or a breakout on their hands.

Officials have long had little control over conditions inside many Honduran prisons, where inmates have largely unfettered access to cell phones and other contraband.

Survivors also told investigators that the unidentified inmate yelled “We will all die here!” as he lit fire to his bedding late Tuesday night in the prison in Comayagua, 86 kilometres north of Tegucigalpa. The lockup housed people convicted of serious crimes such as homicide and armed robbery, but also people awaiting trial.

“We couldn’t get them out because we didn’t have the keys and couldn’t find the guards who had them,” Comayagua fire department spokesman Josue Garcia said.

Other prisoners were set free by guards but died from the flames or smoke as they tried to flee into the fields surrounding the facility, where prisoners grew corn and beans on a state-run farm.

Rescuers carried shirtless, semiconscious prisoners from the prison by their arms and legs. One hauled a victim away by piggyback.

Unlike U.S. prisons, where locks can be released automatically in an emergency, Honduran prisons are infamous for being old, overcrowded hotbeds of conflict and crime.

Once inside, rescue workers found piles of bodies so badly burned they looked like piles of charred mannequins. Some bodies fused together, and officials said it could take weeks to identify them.

Outside the prison family members gathered late into the afternoon, some crying and some demanding justice,

“We want to see the body,” shouted Juan Martinez, whose son was reported dead. “We’ll be here until we get to do that.”

Survivor Ever Lopez, 24, who was serving time for homicide, said he was sleeping when the fire broke out about 11 p.m.

“I saw the smoke from cell block six and it spread throughout the prison,” he said. “The other prisoners and I broke through the roof with our bare hands and fled. Thank God I’m alive.”

Officials said 272 people were confirmed dead, but many prisoners were unaccounted for and the death toll could go to 300 or more. Among the dead were six prisoners who drowned after trying to seek refuge in a water tank. There were 852 people in the prison at the time of the blaze.

A prisoner identified as Silverio Aguilar told HRN Radio that he first knew something was wrong when he heard a scream of “Fire! Fire!”

“For a while, nobody listened. But after a few minutes, which seemed like an eternity, a guard appeared with keys and let us out,” he said.

He said there were 60 prisoners packed into his cell.

“The guards first thought they had a prison break, so they followed the law saying no one could enter to prevent unnecessary deaths,” he said.

Honduran President Porfirio Lobo said on national television that he had suspended the country’s top penal officials, including Orellana, and would request international assistance in carrying out a thorough investigation.

“This is a day of profound sadness,” Lobo said.

Orellana said the convicts were allowed to work outdoors, unlike those held in a maximum-security facility for the country’s most dangerous prisoners in the capital, Tegucigalpa.

Located in the middle of irrigated fields and several large ponds, the prison was comprised of 12 buildings set close together, with an open, dirt prison yard within a central compound. A single dirt road led into the facility, which has a soccer field on the property.

A string of riots and fires

Honduras has one of the world’s highest rates of violent crime, and its overcrowded and dilapidated prisons have been hit by a string of deadly riots and fires in recent years. Officials have repeatedly pledged to improve conditions, only to say they don’t have sufficient funds.

Tuesday’s blaze was the world’s deadliest prison fire since 1930, when 322 prisoners were killed in Ohio.

The U.S. State Department has criticized Honduras for “harsh prison conditions” and violence against detainees.

A 2004 fire at a state prison north of the Honduran capital killed more than 100 incarcerated gang members. A fire a year earlier at a nearby facility killed 70 gang members. And in 1994, a fire sparked by an overheated refrigerator motor in an overcrowded Honduras prison killed 103 people.

Honduran authorities have repeatedly pledged to improve conditions, but human rights groups say little has been done in the country of 7.6 million people, a major transit route for drugs headed from South America to the United States.

“This is a problem that’s existed for a long time and the solutions haven’t been applied. But now we have to do something even though we don’t have the money,” Security Minister Pompeyo Bonilla told reporters.

The U.S. sent help from a base at Soto Cano Air Base, about 15 minutes from the prison.

U.S. Military Staff Sgt. Bryan Franks said smoke was no longer visible above the city, and that his team included four vehicles made up of a 10-man medical team, security guards and firefighters.

Hundreds of relatives rushed to Santa Teresa Hospital in Comayagua state to learn the fate of their loved ones, fire chief Leonel Silva said.

Lucy Marder, chief of forensic medicine for the prosecutor’s office, said she believed the death toll would rise and it would take at least three months to identify victims, some burned beyond recognition, because DNA tests will be required.

Honduras has 24 prisons, 23 for men or both genders, and one exclusively for women. In December, the total prison population was 11,846 of which 411 were women.