Bangkok: Suspected Iranian bomber had his legs blown off 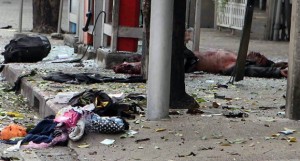 A suspected Iranian bomber had his legs blown off as he hurled a grenade at Thai police in the capital Bangkok, with Israel accusing Tehran of being behind the third attack in world capitals this week.

But while Israel blamed the attempted attack on arch-foe Iran and its Lebanese ally Hezbollah, Thai authorities stopped short of drawing that link.

The explosion in central Bangkok came a day after bomb attacks targeted Israeli embassy staff in India and Georgia, with a female diplomat critically wounded in New Delhi, in attacks Israel said were plotted by Iran.

Thai bomb squad experts were called out to the Sukhumvit Road area in the east of the city after a blast at a house, after which three men were seen fleeing, authorities said.

One of the men hurled an explosive device at a taxi, which refused to stop, and then tried to throw another at police, triggering a blast at the side of a busy road which tore off his legs, they said.

Police said they found an Iranian ID on the injured man, who was admitted to a Bangkok hospital for emergency treatment.

Authorities also detained an Iranian man at Bangkok’s Suvarnabhumi Airport for questioning but it was not immediately clear if he was one of the two other suspects, whose motives were unclear.

Police were searching for the third man.

“The attempted attack in Bangkok proves once again that Iran and its proxies are continuing to act in the ways of terror and the latest attacks are an example of that,” Israeli defence minister Ehud Barak said.

However, Thai authorities declined to speculate on whether the Iranian man was involved with any militant group.

“The police have control of the situation. It is thought that the suspect might be storing more explosives inside his house,” government spokeswoman Thitima Chaisaeng said.

Bangkok has been on edge since Thai police charged a Lebanese man last month suspected of planning an attack in the capital following a US warning of a possible terrorist strike against tourist areas.

Thai authorities alleged that man had links to Hezbollah, an Iranian- and Syrian-backed Muslim Shiite group that is blacklisted as a terrorist organisation by Washington.

Police said they had found no direct link between Tuesday’s bombings and the earlier threat, but had received a separate warning from intelligence sources about a potential new attack.

The blasts come amid rising tensions between Iran and its critics.

An Israeli embassy car exploded in a ball of flames in a diplomatic area of central New Delhi a day earlier, injuring a 42-year-old female diplomat and her Indian driver who were pulled from the wreckage by bystanders, according to witnesses.

The woman needed surgery to remove shrapnel but her life was not in danger.

In the Georgian capital Tbilisi, police defused a bomb found in another Israeli embassy car.

US secretary of state Hillary Clinton condemned those attacks in the “strongest possible terms”, although the White House reserved judgment on who was responsible.

Iranian foreign ministry spokesman Ramin Mehmanparast has rejected the accusations that Tehran was behind them.

“Iran condemns all acts of terrorism,” he was quoted as saying by Al-Alam television.

The method used in the attacks in India and Georgia resembles the tactics of assassins who have been targeting Iranian nuclear scientists with magnetic bombs placed on their vehicles, murders blamed by Iran on Israeli and US secret services.

The blasts in the sprawling Thai capital were not near the main area for embassies.

The safety scares are another blow to Thailand’s tourist-friendly image, which was badly dented last year by devastating flooding across much of the country, as well as rounds of rival political protests in recent years.

In recent weeks, security has been stepped up around possible targets in Bangkok, including the Israeli embassy and the Khao San Road backpacker district.

Britain warned its citizens to be on guard following the latest incident.