SNC: The murderous Assad regime will perish in Lebanon, Syria

On the occasion marking the seventh anniversary of the assassination of former Prime Minister Rafik Hariri, Syrian National Council issued a statement which was read by March 14 Secretary-General Fares Soueid at the Beirut International Exhibition and Leisure Center.

Here are the highlights of the statement:

“Dear Lebanese brethren, from Syria … We salute you on the seventh anniversary of the assassination of Rafik Hariri.”

“We, Lebanese and Syrians, have a mutual cause. We always reiterate that democracy in Syria is the base of stability and democracy in Lebanon.”

“We stand in solidarity with you … on this occasion. We would like to confirm, contrary to Assad’s allegations, that our revolution, which fights with its flesh, does not need to use your territory in the face of Assad.”

“With the support of Arab and international brethren, the Chinese and the Russians will not succeed in aborting our revolution.”

“We will establish diplomatic relations between Syria and Lebanon as two independent countries and not under the [Syrian regime’s] slogan of ‘one people in two countries.’”

“We will demarcate the border with Lebanon and resolve the issue of the disputed Shebaa Farms …cancel the Syrian-Lebanese Higher Council and investigate the file of the thousands of Lebanese detained in Syrian jails.”

“The murderous [Assad] regime will perish in both our countries.” 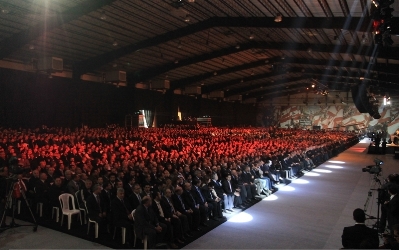