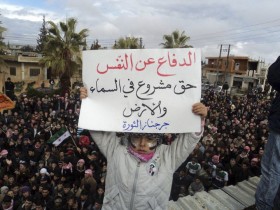 BEIRUT , Lebanon- The diplomatic impasse on Syria after Russia and China’s steadfast refusal to back any UN resolution condemning the ruthless repression of protesters could accelerate the militarisation of the uprising, analysts warn.

Diplomatic solutions to the Syrian crisis have been “exhausted,” said Shadi Hamid, head of research at the Brookings Doha Centre, “and now you’re seeing serious discussion of the military options.”

“You’re hearing more discussion of safe zones, buffer zones, humanitarian corridors and that’s something that the Syrian opposition has requested,” he said.

Moscow and Beijing sparked outrage in the West for vetoing on Saturday a UN Security Council resolution condemning the crackdown by President Bashar al-Assad’s regime on the 11-month uprising, which activists say has left more than 6,000 people dead.

It was the second time they had done so in four months, and Syria’s cold war ally Russia underlined its intention to prevent world powers from forcing the crisis by sending Foreign Minister Sergei Lavrov to Damascus on Tuesday.

His visit came as government troops stepped up a fierce assault on the flashpoint central city of Homs, where more than 400 people have died since Saturday, according to activists.

The Security Council veto “was the best recruiting tool that the Free Syrian Army (FSA) could have asked for. It puts them in a much stronger position now,” Hamid said.

“I think a lot of Syrians are saying ‘We tried peaceful protests, it didn’t work, now we have to defend ourselves from the repression of the regime’,” he added.

Hilal Khashan, professor of political science at the American University of Beirut (AUB), argued that the diplomatic stalemate at the United Nations did not prevent outside support for the Syrian opposition.

Without having to go through the Security Council, “the West has many options at its disposal for weakening the regime, particularly by supplying the FSA and imposing more economic sanctions,” he said.

Imad Salameh, another political analyst at AUB, warned that pursuing such options would not prevent a violent political transition.

“All that can be done internationally is (to help) this process take place quickly,” he said, referring in particular to “an economic, political and military blockade of the regime.”

After Russia and China’s Security Council veto, the Syrian National Council and the FSA called on businessmen in Syria and other Arab countries to help finance “the self-defence operations and civilian areas controlled by the FSA.”

The SNC is a coalition of Syria’s major opposition parties, while the FSA, based in Turkey across the border from northwestern Syria, claims to have 40,000 soldiers who have deserted the regular army.

In Washington, top Republican US Senator John McCain said the time had come to consider arming the outgunned opposition to Assad.

But the FSA would need much more than that to topple the regime, said the Brookings Doha Centre’s Hamid.

“Arming the Free Syrian Army would have to come with other measures for it to be successful, and that would include targeted air support. It would require some kind of more involved military intervention,” as happened in Kosovo in the 1990s, he added.

Analysts say the government’s violent crackdown could intensify in the coming days.

“The Syrian question has yet to reach an extreme. The violence will rise as well as the death toll, but the crisis will be settled this year, and not in a matter of years, as some think,” said the AUB’s Khashan.

For Salameh, the military establishment is all that remains of the regime.

“I think the popular and international pressure on Syria will finally cause this institution to collapse,” he said.