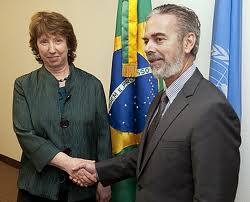 Brazil, a rising economic and diplomatic power in the developing, expressed support for efforts by the Arab League to end the ongoing violence in Syria.

Catherine Ashton, the foreign affairs chief of the European Union (EU) met with Brazilian foreign minister Antonio Patriota in Brasilia on Monday to discuss both the situation in Syria and Iran. The two issued a statement praising Arab League chief Nabil al-Arabi, citing “how much we support him on the Arab League’s initiative and the importance of seeing that leadership [being] able to support the people of Syria into a future free of bloodshed.”

Patriota also said he supported potential measures in Syria by the United Nations Secretary General Ban Ki-moon, as well as increasing cooperation between the UN and the Arab League.

Brazil’s stance on Syria appears to be an about-face from its previous laissez-faire attitude. More importantly, among the BRIC nations – Brazil, Russia, India and China — Brazil is seemingly breaking off with Moscow and Beijing, which over the weekend vetoes a UN resolution condemning the regime of President Bashar al-Assad in Syria.

However, as recently as last November, deep into the Syrian crisis, Brazil specifically rejected any foreign intervention in Syria.

The Brazilian foreign ministry referred to the bloodshed in Syria as its “internal affairs.”

Brazil has also abstained in proposed measures against Libya and Iran over the past few years. Assad himself visited Brazil in summer of 2010.

Now, in early 2012, after 7,000 Syrians have been killed by Assad’s relentless war machine, Brazil may be taking a new approach in its foreign policy in the Middle East.

Alex Gibson, Research Associate at the Council on Hemispheric Affairs, commented that Brazil has long abstained from controversial foreign affairs issues (including human rights) in its quest to obtain a permanent seat on the UN Security Council and to avoid jeopardizing trade and economic relationships with countries like Iran and China.

“But if [Brazil] wants to become a major international player, it must take a broader and more generous view when it comes to the Arab Spring,” Gibson wrote.

“Brazil needs to denounce President Bashar al-Assad’s regime, and to join the international call for its immediate removal.”

Professor Rafael Pons Reis, an expert on international relations at Universitário do UniCuritiba e Grupo, told the Rio Times newspaper: “Brazil wants a permanent seat on the UN Security Council and any ‘loyalties’ must be seen against this backdrop of global promotion by showing pragmatism. Brazil will defend its national interests on the international scene, without jeopardizing its economic development.”

Gibson noted that following “China and Russia’s stunning refusal to act in the wake of the escalating atrocities committed by Assad against his own people, Brazil is no longer in a position to please all major international players. By continuing to pursue a universally unpopular diplomatic position, it may fast isolate its political benefactors in the international community. A nation that sits comfortably on the fence while the world clamors for intervention will never be seen as a compelling world player.”

Indeed, other observers now believe that countries that fail to condemn that brutality in Syria will lose more in credibility than they stand to gain economically.

“By abstaining, [Brazil has] have not only failed the Syrian people, but [has] also failed to offer a credible alternative to end the bloodshed,” the UN director of Human Rights Watch told the Christian Science Monitor. “This vote erodes their credibility in the global arena and might come to define their tenure in the Security Council and undermine their claim to permanent membership.”