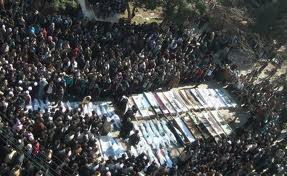 Beirut – From his hospital bed in Lebanon, wounded Syrian Abu Abedo recalls the horrors of the massacre in Homs province, which has been bombarded by President Bashar al-Assad’s troops.

Abu Abedo, 30, is among several Syrians wounded in the regime’s crackdown on pro-democracy protests, who have been arriving in secret to Lebanon.

Reached by phone at the Dar al-Zharaa hospital in Tripoli, Lebanon, he spoke of the “horrors and massacres” in Homs.

“I can declare Homs a disaster area,” he said. “Corpses and blood litter the streets inside Baba Amr, al-Khalidiyeh and Bab as-Sbaa. You smell death everywhere you go.”

Abu Abedo, who was not using his real name, said: “The regime is demolishing buildings three to five storeys high on the heads of the people and children with no mercy.”

Five wounded men from Homs were transported across the border to northern Lebanon in the past 24 hours, opposition activists told dpa.

“Two of the wounded are in critical condition and are being treated in hospitals in (the Lebanese northern port city of) Tripoli,” said Abu Rabih, a Syrian activist in the area.

Abu Abedo said he was wounded in the fierce shelling that began on Friday. At least 260 people were killed in Homs on Friday and Saturday, opposition activists said. Another 50 were killed in the central city of the same name on Monday.

“I am the man who you usually see during the protests in Baba Amr neighborhood, cheering the protesters and calling on them to chant anti-regime slogans,” he said.

He was hit by shrapnel in his back and leg when security forces, positioned at the outskirts of the province, attacked the demonstration he was participating in.

“The man who was holding me was killed and I was severely wounded. Since I am wanted by this brutal regime, I was helped by some activists and managed to get inside the Lebanese border and reached this hospital,” said Abu Abedo.

Government forces have set up offices inside the main hospitals in Homs, he said, and many people were dying from their wounds because they are afraid of getting arrested if they sought medical help.

“Our activists have set up makeshift clinics in different places and the shelling today targeted some of them,” he said.

“People are dying in scores. Children are losing their limbs because doctors do not have the right medical means to treat them,” he said, adding that there was a lack of blood, anesthetics and essential medical supplies.

Since the uprising started in mid-March, thousands of Syrians have sought refuge in the mainly Sunni-Muslim-dominated areas in northern Lebanon.

The United Nations High Commissioner for Refugees said in January that some 5,039 Syrian refugees had registered with them.

“Access to certain areas in Syria which are gripped by regular violence are difficult to reach by our teams who are currently in the country,” Bijan Farnodi, a spokesman for the Geneva-based International Committee for the Red Cross, told dpa.

The United Nations said in January that more than 5,400 people had died in the government crackdown on pro-democracy protests that erupted in March. The Syrian Observatory for Human Rights, which regularly updates the number of casualties, puts the number at 6,800.

Photo: Residents attend mass funeral for what activists say are victims of shelling by the Syrian army on Saturday, in the Khalidiya neighborhood in Homs.