Tens of thousands protest in Moscow against Putin 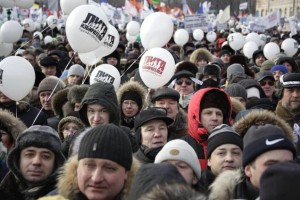 Undeterred by subzero temperatures that froze their breath and left icicles adorning many men’s mustaches and beards, tens of thousands of Russians marched through the streets of Moscow on Saturday demanding fair elections just a month before they are to go to the polls to choose a new president.

Despite fear that the frigid weather and bickering among the opposition would curb the turnout, the third mass protest in two months against the rule of Russian leader Vladimir Putin appeared to have been the largest Moscow has seen in a generation.

Authorities clocked the turnout at 36,000, bigger than either of the December demonstrations. Opposition leaders estimated that 120,000 demonstrators swarmed Moscow’s Bolotnaya Square, while demonstrators said they believed they numbered 50,000 to 100,000.

After passing through a row of metal detectors, a throng of protesters marched about a mile to reach Bolotnaya Square, on an island in the center of the Moscow River.

Protesters wearing white ribbons, signifying peaceful antigovernment sentiment, headed the procession with a banner that said, “Russia Without Putin” and “For Fair Elections.” They were followed by monarchists with yellow-black-and-white flags, Communists with red flags and others.

As a helicopter buzzed overhead, they denounced Putin, who is expected to return to the presidency after the March 4 election.

Allegations of fraud in Dec. 4 parliamentary elections that saw Putin’s United Russia party garner nearly 50% of the vote sparked a wave of antigovernment protest that brought a taste of the “Arab Spring” to Moscow.

Demonstrators Saturday carried anti-Putin posters, and some stood out with especially creative get-ups.

Attached to the back of journalist Vladimir Laktanov, 29, was a scantily clad blowup doll, which he called Anfisa, with a poster that read, “On assignment from the U.S. government, Anfisa will compensate all participants in the procession.”

“Sex with Anfisa is my response to absurd allegations of U.S. involvement in the demonstrations,” Laktanov said. “Everyone is here of their own accord.”

In December, Putin, pandering to a widely accepted view in Russia, accused the United States of inciting mass protests to destabilize the country.

A few miles west of Bolotnaya Square, Putin supporters gathered in a park for their own rally. The demonstration brought out 138,000 people, according to police estimates, a much higher number than the permitted 15,000.

Although Putin enjoys more than 50% support in Russia, especially among the working class outside Moscow, accounts of demonstrators being forced to attend the rally were widely published in the Russian press last week.

Putin, now the country’s prime minister, is expected to win next month’s election because the opposition does not have a strong leader and lacks focus.

The lineup in the presidential race includes billionaire and New Jersey Nets owner Mikhail Prokhorov, largely thought to be a Kremlin-orchestrated candidate. Others in the running are Communist Party leader Gennady Zyuganov, nationalist leader Vladimir Zhirinovsky and A Just Russia leader Sergei Mironov, all attracting considerably weaker support than Putin.

Although many of the anti-government protesters are resigned to accepting Putin as the next president, they hope the demonstrations will put pressure on the authorities.

“We want fair elections, freedom of speech and a government not run by ex-KGB,” said Dmitry Kazhakov, 42, a shipping manager. “Water wears away stone. If we put more and more pressure, something will change.”

“Civic society is growing,” said Aleksandr Redin, 22, a factory worker from Zelenograd, an industrial city near Moscow. “Everyone is talking about what is happening, politics is entering the conversation of laborers. People are waking up. They are here today and they’ll come out again.”