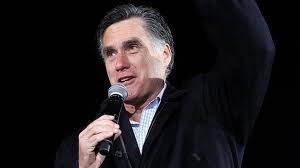 His win was his second in a row, after a double-digit victory in Florida, bolstering his delegate count and claim on the Republican nomination.

“We’re not going to settle for a president who tells us, ‘It could be worse,’ ” Romney said.

He said the decline in joblessness reported in federal figures for January was welcome, but he said the improvement was a result of business innovation “and not to you, Mr. President.”

Rivals Newt Gingrich and Ron Paul were vying for second and a share of delegates. Both were looking ahead to delegate contests elsewhere this month, as was Rick Santorum, the former Pennsylvania senator, to help keep their chances alive.

Partial results released by the Nevada Republican Party, had Romney with a strong lead and Gingrich in second place. Official votes were not yet in from Las Vegas and surrounding Clark County, the most populous part of the state and considered a likely strong base for Romney.

Gingrich, in a subdued news conference in Las Vegas, vowed to continue his campaign until the Republican National Convention in Tampa in August. He said Republican voters “are going to want an alternative to a Massachusetts moderate.”

Gingrich renewed his criticism of Romney as “fundamentally dishonest” for the former governor’s negative attack ads unleashed on Gingrich in Florida.

“If you can’t tell the truth as a candidate for president … how can the country possibly expect you to lead as president?” Gingrich said of Romney.

The first GOP presidential nominating contest in the West concluded a brief campaign across the economically hard-hit state, coming less than a week after Romney’s big win in Florida’s primary.

With five state contests complete, the next contests come quickly: Colorado and Minnesota on Tuesday.

Polls of voters entering caucus sites conducted for the Associated Press showed three out of four called themselves conservative. About one-quarter of the GOP turnout was among Mormon voters, a major source of strength for Romney as he seeks to become the first president of that faith.

Nevada’s 28 delegates to the national nominating convention were at stake.

In sharp contrast to the brutal negative TV ad barrage seen in Florida, the Nevada campaign was relatively low key. In Las Vegas, packed with Super Bowl revelers, the caucuses were scarcely noticed, and little political advertising could be seen.

Gingrich, whose campaign has been propelled by donations from deep-pocketed casino owner Sheldon Adelson, said beforehand that he was looking for a strong second-place finish.

“I think our hope is that we may be able to come in second, although Ron Paul is very organized,” Gingrich, the former House speaker from Georgia, said before the caucuses. “We’re going all out to see if we can’t be a good solid second here, and then we’re on to Colorado and Minnesota.”

A poll of GOP voters entering Nevada’s caucuses, held in more than 100 schools and other places around the state, showed they were heavily conservative. Three out of four voters said they were Tea Party supporters, and one in four said they were Mormon, a group that voted overwhelmingly for Romney in the state’s 2008 caucuses.

Both parties were watching turnout for signs of enthusiasm — or lack of it — among GOP voters. In 2008, 44,000 Republicans voted in Nevada’s presidential caucuses, and 116,000 Democrats voted in their party’s caucuses. In the 2008 general election, Obama carried Nevada by more than 12 percentage points over Republican John McCain, but the state’s economic misery — high unemployment, reduced tourism and a collapsed housing market — promised to make it difficult electoral terrain for the president this year.

The unusual nature of the Nevada caucuses, with various precincts meeting at different hours on a Saturday before the Super Bowl, was stirring dissent within the Republican ranks. In some sites in Carson City, the Reno Gazette-Journal reported, voters were able to show up early, vote and leave, while in other locations, voters had to stick around for speech-making before casting ballots.

Many caucus-goers signed petitions urging the state’s Republican Party to ditch the caucuses and return to a primary system next time, the newspaper reported. The last presidential primary in Nevada was in 1996, when high costs and low turnout prompted the switch.

In Reno, Paul Jackson, a Brit who became a U.S. citizen 13 years ago, led the precinct caucus at Galena High School. He was wearing a Gingrich sticker on his chest, but Romney carried the day in his precinct. Romney got 40 votes, to 12 for Gingrich, eight for Paul and five for Santorum.

Still, Jackson celebrated his role in U.S. democracy. “It’s been great. It’s one of the things the U.S. holds proud is our ability to vote for elected officials,” Jackson said. “People don’t understand, you don’t vote for the prime minister in England.”

Lisa Craner urged other voters at the Galena High precinct to back Paul, saying he, not Romney, is more likely to be able to defeat Obama in the fall election. “I want people to know that Congressman Paul is attracting independent voters,” said Craner, 41. “He appeals to me primarily for his economic and foreign policies, bringing the troops home and stop policing the world. … We really need to take care of our business at home.”

Romney enjoyed organizational advantages in Nevada and was likely to be boosted by Nevada’s Mormon population. He has been a leader in the Mormon church and ran the Olympics when they were held in next-door Utah.

The former Massachusetts governor kept his focus on President Obama as he toured the state ahead of the caucuses. “I’m convinced that I can beat Barack Obama, and I don’t think anyone else can,” he told volunteers.

His campaign has been largely based on attacking the president’s performance on the economy, an issue that dominates politics in the state. Nevada is still reeling from a decline in tourism and collapse in housing prices. The state unemployment rate was 12.6% in December, and Nevada has among the highest home-foreclosure rates in the nation, as the loss of tourist dollars and the jobs they create pulled down the market.

Romney’s economic focus comes against a backdrop of brightening indicators nationally, led by the federal report Friday that job creation soared in January and the national unemployment rate declined to 8.3%.

“The policies of this administration have not been helpful. They, in fact, have been harmful. They have slowed down the recovery, made it more difficult,” Romney said in Reno Friday. “The president deserves the blame that he’ll receive in this campaign.”

The caucuses in some areas were structured to permit voting by shift workers in casinos and other tourism-related businesses, and by early-rising retirees. In Las Vegas, a special Saturday night caucus was scheduled, after the expected release of initial results.

Clark County Republican Chairman David Gibbs said the party has taken precautions to ensure that no registered voter is permitted to vote more than once in caucus sessions. “It’s going good,” he told KTLV-TV at mid-morning. “There are some long lines. We expected that.”