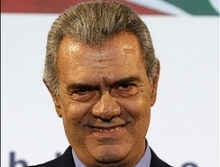 Lebanese Politicians, foreign diplomats and religious leaders of various sects gathered Saturday at the St. George Cathedral in downtown Beirut to pay their respects to the head of the Democratic Renewal Movement former MP and minister Nassib Lahoud, who passed away Thursday at age 68 after a long battle with cancer.

The Patriarch praised Lahoud for “working on spreading democracy ”

Mikati on behalf of Suleiman decorated Lahoud posthumously with the Order of the Cedar officer grade, the highest decoration in Lebanon.

“I lost a dear friend who was key in forming the first government of my presidential term, and remained a close consultant afterward,” Suleiman said Thursday.

Lahoud was laid to rest at his hometown of Baabdat in the Metn district.

He passed away at dawn Thursday after a long battle with illness. He was 68.

Click on Ya Libnan for more info on Nassib lahoud