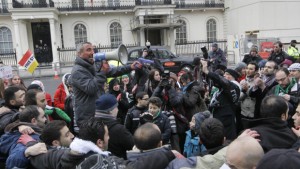 Demonstrators have stormed Syrian embassies in Europe, the Middle East and Australia after Syrian forces reportedly killed more than 200 people in the city of Homs.

British police used batons to beat back protesters attempting to storm the Syrian Embassy in London for a second time after successfully breaking in early Saturday. The crowd broke several of the embassy’s windows during the melee.

Police said six people were arrested in the initial assault on the building, while another six were arrested hours later when demonstrators chanting “We want to close the embassy” kicked down barriers and rushed the building.

A similar scene played out in Athens before dawn, where police said 13 people — 12 Syrians and one Iraqi national — were detained after forcing their way into the Syrian Embassy before dawn.

In Germany, 20 people forced their way into Syria’s Embassy in Berlin on Friday and damaged offices there, police said.

Syrian protesters in Cairo set part of the embassy on fire Friday night, while protesters in Kuwait broke windows at the embassy and hoisted the opposition flag. The Kuwait news agency said a number of security personnel were hurt in scuffles.

Syrian protesters also attacked and took control of the Syrian embassy in Tripoli, Libya The announcement came from Anas al-Khalid, a member of the Syrian National Council which joins groups opposing the regime of Bashar el Assad. Al-Khalid added that the SNC, “will officially occupy the embassy tomorrow after having signed a number of papers. The taking of the embassy was peaceful. There was no-one in the embassy when we entered.” . ,

In Australia a group of men stormed the Syrian embassy in Canberra, smashing up the ground floor, as protesters attacked other Syrian embassies in Europe and the Middle East.

Australian Federal Police say extensive damage was caused to the embassy after the men forced their way in about 9.30pm (AEDT) on Saturday.

Syria’s government has denied the assault on Homs, calling news reports about it part of a “hysterical campaign” of incitement by armed groups against Syria, meant to be exploited at the U.N. Security Council as it prepares to vote on a draft resolution backing an Arab call for President Bashar Assad to give up power.

A vote was scheduled in New York later Saturday, but negotiations were continuing to the last minute as Russia, a strong ally of Syria, signaled it would veto any call for a political transition in the country.

The Syrian National Council, Syria’s main opposition group, urged Russia to stop its “shameful intransigence” at the U.N. and for the world to help stem the bloodshed. It also called for Syrians to protest outside their embassies.

After protesters gathered force Saturday afternoon in London, police brought in sandbags and riot gear to regain control of the surging crowd at the embassy. Britain’s Foreign Office condemned the initial break-in, which police said began at 0100 GMT Saturday (8 p.m. EST Friday) and drew around 150 protesters.

Britain’s Foreign Office said it takes seriously its obligations to protect foreign embassies and their employees, and that police are reviewing security arrangements at the Syrian Embassy in light of Saturday’s events.

Photo: A protester holds a megaphone and a toy gun amongst Syrians demonstrating outside the Syrian Embassy in London Saturday, Feb. 4, 2012 after Syrian government forces assaulted the city of Homs. (AP Photo/Sang Tan)