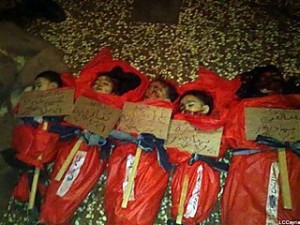 The Syrian military launched an offensive to regain control of suburbs on the eastern edge of Damascus Sunday, storming neighborhoods and clashing with groups of army defectors in fierce fighting that sent residents fleeing and killed at least three civilians, activists said.

Six soldiers were also killed when a roadside bomb detonated near the bus they were traveling in several miles south of the capital.

Activists said government forces dispatched dozens of tanks and armored vehicles to reinforce troops in a belt of suburbs and villages on the eastern outskirts of Damascus where armed defectors have grown increasingly bold, staking out positions and setting up checkpoints in recent days.

The area on Saturday witnessed some of the most intense fighting yet so close to the capital as President Bashar Assad’s regime scrambles to try to uproot protesters and dissident soldiers who have joined the opposition.

The ten-month uprising against Assad, which began with largely peaceful demonstrations, has become increasingly militarized recently as more frustrated protesters and army defectors have taken up arms against the regime.

The assault on the suburbs seemed to be a sign of the growing presence of dissident soldiers closer to Damascus, and the regime’s rising concern about the situation. Although the tightly controlled capital has been relatively quiet since the uprising began, its outskirts have witnessed intense anti-regime protests and army defectors have become more visible and active in the past few months.

The military has responded with a withering assault on a string of Damascus suburbs in a bid to stamp out the resistance, leading to a spike in violence has killed nearly 100 people since Thursday.

The rising bloodshed has added urgency to new attempts by Arab and Western countries to find a resolution to the 10 months of violence, which according to the United Nations has killed at least 5,400 people as Assad seeks to crush persistent protests demanding an end to his rule.

The U.N. is holding talks on a new resolution on Syria and next week will discuss an Arab League peace plan aimed at ending the crisis. But the initiatives face two major obstacles: Damascus’ rejection of an Arab plan that it says impinges on its sovereignty, and Russia’s willingness to use its U.N. Security Council veto to protect Syria from sanctions.

Arab League Secretary-General Nabil Elaraby told reporters in Egypt on Sunday that contacts were under way with China and Russia.

“I hope that their stand will be adjusted in line with the final drafting of the draft resolution,” he told reporters at Cairo airport before leaving for New York with Qatari Prime Minister Hamad bin Jassim.

The two will seek U.N. support for the latest Arab plan to end Syria’s crisis. The plans calls for a two-month transition to a unity government, with Assad giving his vice president full powers to work with the proposed government.

The Arab League announced Saturday it was halting the work of its observer mission in Syria immediately because of the increasing violence, until the League’s council can meet to decide the mission’s fate. Arab foreign ministers were to meet Sunday in Cairo to discuss the Syrian crisis in light of the suspension of the observers’ work and Damascus’ refusal to agree to the transition timetable, the League said.

Elaraby said the observers will not leave Damascus, pending a decision on the mission’s fate.

While the international community scrambles to find a resolution to the crisis, the violence on the ground in Syria has continued unabated.

On Sunday, activists said three civilians including a 16-year-old died in fierce fighting in the suburb of Kfar Batna. There was heavy shelling there and in the nearby suburbs of Saqba and Arbeen, they said.

“Troops this morning stormed Kfar Batna, Hammouriyeh and Ein Tarma,” said an activist who identified himself as Mohammad Doumani, based in the Damascus suburb of Douma. “It looks like the regime has launched an operation to regain control of those areas.”

Doumani said dozens of families were fleeing Ein Tarma and nearby areas, headed to Damascus. Amateur videos posted on the Internet showed residents, including women and children, fleeing on foot carrying bags stuffed with belongings as the crackle of gunfire resonated in the background.

The British-based Syrian Observatory for Human Rights said three people were killed in Kfar Batna as well as an army defector near the Damascus suburb of Zabadani. It said one person was killed in the central city of Homs, and another in the capital, when troops fired on a funeral procession for a victim of Saturday’s’ fighting.

Among those killed in the attack some 12 miles (20 kilometers) south of the capital were two first lieutenants, SANA said.

Photo: This citizen journalism image provided by the Local Coordination Committees in Syria and released on Friday Jan. 27, 2012, purports to show the bodies of five Syrian children wrapped in plastic bags, with signs in Arabic identifying them by name. Activists say the children were killed in a shelling attack by Syrian forces, in the Karm el-Zaytoun neighborhood of Homs, Syria, on Thursday Jan. 26, 2012 A “terrifying massacre” in the restive Syrian city of Homs has killed more than 30 people, including small children, in a barrage of mortar fire and attacks by armed forces loyal to President Bashar Assad, activists said Friday.