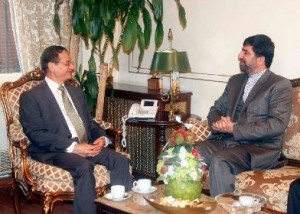 His comment comes after Iranian Ambassador to Lebanon Ghadanfar Roken Abadi handed a letter to Mansour on Saturday sent by his Iranian counterpart Ali Akbar Salehi, who stated that Tehran is willing to help resolve Lebanon’s electricity problem.

During an interview with An-Nahar newspaper published on Sunday, Mansour said that Lebanon has “accepted the Iranian offer, because this does not require power plants to be built. What is needed in this case is for electric cables to be installed between Lebanon and Iran via Iraq and Syria.”

However, Mansour pointed out that currently “there is a technical problem between Lebanon and Syria, but it can be solved.”

Asked about whether this quantity serves as a gift offered by Tehran to Beirut, Mansour said “The offer is to sell this amount to Lebanon for a competitive price.” He did not elaborate .

The Iranian offer came a few days before a cabinet session scheduled to be held on Tuesday to discuss the electricity crisis.

According to analysts Lebanon needs a lot more than 400 MW ,. The Iranian ambassador said yesterday following his meeting with Mansour:

“Lebanon requires an additional 1,000 MW and we consider this to be a small amount … given that we export around 25,000 MW and we have a surplus of production estimated at around 6,000 MW. We can resolve this problem easily … as soon as possible with simple conditions,” Roknabadi told reporters without elaborating on the “simple conditions”.

It is not clear why the quanatity suddenly dropped to 200 MW.

Lebanon’s Energy and Water Minister ) Gebran Bassil and former Iranian Foreign Minister Manouchehr Mottaki signed an agreement on energy cooperation back in October 2010 . Bassil also reportedly discussed during his Tehran visit the possibility of signing contracts to build one or two gas-operated power stations, but nothing has happened since even though Tehran has been fully aware of Lebanon’s continued power outages.

One analyst told Ya Libnan”: Iran’s offer is like a pie in the sky ” and explained why:

“Can you imagine how reliable will this power be if it is going to come through cables via Iraq and Syria? Furthermore its true that this does not require power plants to be built but has anyone figured out the cost of the cables that will be installed between Iran and Lebanon ?

“If Iran really wants to help then the solution is simple . It should convince its allies in Lebanon ‘Hezbollah and Amal’ to pay their electric bills. Once they start paying Lebanon can then easily afford to finance the construction of thousands of Megawatts of electricity plants”.