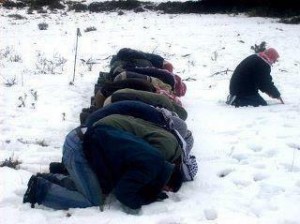 Syrian government forces have killed at least 33 people in a rebel town near the Lebanese border in the last few days in an attack to dislodge army defectors and insurgents, activists and residents of a nearby town said Sunday.

Rankous, a mountain town of 25,000 people, 30 km north of Damascus, has been under tank bombardment since Wednesday, when it was besieged by several thousand troops led by the elite Fourth Division, under the command of President Bashar Assad’s brother Maher, they said.

A resident of the nearby town of Sednaya, who did not want to be identified, said the 33 were killed since Wednesday and that no casualty figures were yet available for Sunday.

“We have managed to get through to people there who say the bombardment has brought down at least 10 buildings,” he said, adding that tens of soldiers have defected and went in to help defend the town.

“A tented army camp has been set up near the entrance of Rankous. Most of the town’s residents have fled to nearby villages,” he added.

There was no immediate comment from the Syrian authorities.

It was the second major attack on Rankous since November when it was stormed by troops after a demonstration demanding Assad’s removal was broadcast on the Arab news channel al-Jazeera, activists said.

The reported attack came after the Arab League said on Saturday that it had suspended its monitoring mission in Syria because of “the critical deterioration of the situation” as state security forces battled rebels holding three suburbs just outside Damascus.

The Arab League called last week for Assad to step down after 10 months of revolt against his rule and will take its suggestion for an Arab peace plan to the UN Security Council next week.

“Given the critical deterioration of the situation in Syria and the continued use of violence … it has been decided to immediately stop the work of the Arab League’s mission to Syria pending presentation of the issue to the league’s council,” Secretary-General Nabil Elaraby said in a statement.

A delegate at the league said no date had yet been fixed for a meeting of the council on Syria.

A Syrian official said the government could not comment on the statement until it received confirmation of the suspension from the Arab League.

The mission’s mandate was to observe implementation of a peace plan and had been extended for a second month.

Photo: Rebels seen praying in the town of Rankous near the Lebanese border