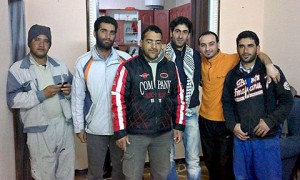 A new element was added to the mystery surrounding five Iranians who were abducted by Syrian rebel fighters last month, with a report from Iran on Saturday that the men are now being held in Lebanon.

Citing an unnamed “tribal figure,” the Iranian state satellite channel Press TV reported that “five Iranian electrical engineers,” who were “kidnapped by armed gunmen while traveling to a power plant in the Syrian city of Homs,” on Dec. 21, “have been relocated to northern Lebanon,” by their captors.

On Friday, an official at an Iranian power company working in Syria said that videotaped statements from the captives released this week by a unit of the rebel Free Syrian Army, in which the men said that they were soldiers and had taken part in the violent suppression of dissent in Homs, were false and had been made under duress. “It’s very clear that they were under pressure when they made these statements … everybody knows that when someone is in the hands of kidnappers, he can be made to say anything,” the official, Bahnam Hakiki, told Syria’s official news agency.

Rebels who spoke to a Reuters correspondent in Beirut via Skype insisted that the five men were soldiers, and said that they would not be released unless the Syrian government ceases its military operations in Homs and frees a senior officer who was arrested after he defected to the opposition.

In the video posted online by a unit of the Free Syrian Army known as the Al Farouq Brigade, one of the Iranians said that the group had been “involved in suppressing and shooting ordinary Syrians,” and “killed a lot of people, including women and children, in the city of Homs.” He added: “We urge Iran’s supreme military leader Khamenei to order the Iranian military personnel who suppress the Syrians to be repatriated from Syria, so we can also return home.”

As Al Jazeera reported, the names given by the men in the video matched the names of the five Iranians who were abducted in December.

There seems to be little doubt that the men were captured by the Al Farouq Brigade, since journalists from the French magazine Paris Match who were embedded with the rebels in Homs last month snapped a photograph of the unit’s commander posing with four of the Iranians on the day they were detained.

The men in that photograph looked identical to some of the men shown in a photograph of the missing group released by Mehr, an Iranians news agency.

Photo: An Iranian news agency’s photograph of five Iranians (and their Syrian cook) who were captured by Syrian rebels last month.