At least 384 children have been killed during Syria’s 10-month uprising and virtually the same number have been jailed, according to the United Nations Children’s Fund (UNICEF).

Spokeswoman Marixie Mercado calls the situation for children in Syria “of the gravest concern to UNICEF.”

“It is something the world should not ignore,” she tells msnbc.com.

Syria has a legal obligation to protect children and uphold their rights according to international law. 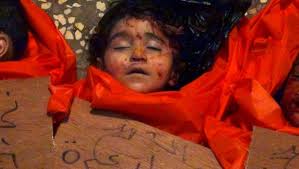 Rima Salah, acting UNICEF deputy executive director, told reporters in Geneva earlier on Friday that as of January 7, 384 children had been killed, most of them boys. About 380 children have been detained, some less than 14 years old.

UNICEF stresses that it has raised these concerns with the government of President Bashar Assad, with whom it has an ongoing relationship.

“Our office there is functioning well, we have a dialogue all the time with the government and civil society,” Rima Salah, acting UNICEF deputy executive director, told reporters in Geneva earlier.

The previous death toll for children in Syria was 307, according to a statement by U.N. human rights chief Navi Pillay on December 2.