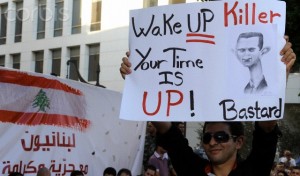 Protests were held on Friday in Lebanon’s northern capital Tripoli and in the Bekaa town of Saadnayel, in support of the pro- Democracy protesters in Syria a statement issued by the office of the Liberation Party said.

Lebanon’s political scene is split between supporters of Assad’s regime, led by Hezbollah, and the March 14 pro-Western camp which supports the pro-democracy uprising.