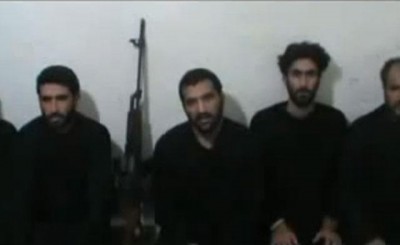 A group of Syria’s opposition “Free Army” has released a video showing what it was said were seven Iranians, including five members of the Revolutionary Guards, captured in the city of Homs.

The video showed travel documents of the captives, some of whom appeared to be speaking Farsi.

“I am Sajjad Amirian, a member the Revolutionary Guards of the Iranian armed forces. I am a member of the team in charge of cracking down on protesters in Syria and we receive our orders directly from the security division of the Syrian air force in Homs,” one of the captives said.

“I urge Mr. Khamenei to work on securing our release and return to our homes,” he added.

The armed Syrian opposition group, which called itself the “al-Farouq brigade of the Free Syrian Army,” also released a statement calling for Iran’s Supreme leader Ali Khamanei to “acknowledge in explicit and unambiguous words the existence of elements of Iran’s Revolutionary Guards in Syria in order to help the Assad’s regime in its crackdown on the Syrian people.”

The group also urged Khamanei to withdraw all Revolutionary Guard fighters from Syria, pledging that that it would then release all captive Iranian fighters.

The group said five of those abducted were military men working with the Syrian air force intelligence and two showed “civilian status” as employees in a power plant in Homs.

It added that all the seven captives entered Syria during the uprising and passports of the five military men did not contain visas, adding that it would soon release the two Iranians with civilian status.

Syrian opposition groups have previously accused Iran and the Lebanese Hezbollah group of assisting forces of President Bashar al-Assad in their bloody crackdown on protesters.

The Syrian Revolutionary Coordination Union reported on Jan. 17 that a group of Hezbollah fighters had hit civilian protesters near Damascus with Russian-origin BM-21Grad rockets.

“The attack was coordinated with the forces of President Bashar Assad,” the Syrian opposition group said.

A source from the Iranian Revolutionary Guard Corps (IRGC) told Al Arabiya on Jan. 16 that the “Iranian government has not yet interfered in situation in Syria,” but stressed that Tehran was committed to a joint defense treaty with Damascus.

“We and our brethren in Iraq and Lebanon are protecting Syria,” the source explained in a clear reference to Nouri al-Malikil’s government and Hezbollah, both allies of Iran.

Despite reports stating that so far the situation in Syria is “stable,” the IRGC, the source pointed out, is still worried of a division or a coup in the Syrian army.

According to American officials who believe the IRGC is taking part in the fight against Syrian opposition, Maj. Gen. Qassem Suleimani, commander of IRGC al-Quds Force, which specializes in operations outside Iran, was in Damascus this month.

Gen. Suleimani’s visit, they argued proved that Iran’s support for the Syrian regime includes the provision of arms and military equipment.

They added that they are sure Suleimani met with the most senior officials in the Syrian regime, including president Bashar al-Assad.

The joint defense treaty between Syria and Iran was signed in June 2006 by a former Syrian defense minister, Hassan Turkmani, and his Iranian counterpart, Mustafa Mohamed Najjar, in Tehran.

Photo: video grab from the internet shows alleged Iranian fighters abducted by a branch of the Free Syrian Army