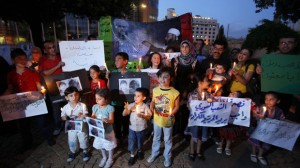 The violence in Syria has escalated . Death toll rose to 84 on Friday according to a report by Al-Arabiya television

Much of the violence was focused in Homs, where heavy gunfire hammered the city Friday in a second day of chaos. A day earlier, the city saw a flare-up of sectarian kidnappings and slayings, and pro-regime forces blasted residential buildings with mortars and gunfire, according to activists who said an entire family was killed.

Video posted online by activists showed the bodies of five small children, five women of varying ages and a man, all bloodied and piled on beds in what appeared to be an apartment after a building was hit in the Karm el-Zaytoun neighbourhood of the city. A narrator said an entire family had been “slaughtered.”