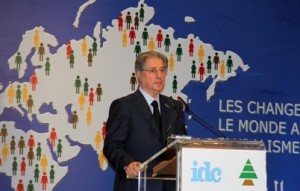 Former Lebanese president and current Phalange Party leader Amin Gemayel said on Friday that “any resistance that challenges the building of the state lacks legitimacy.”

“There is no legitimacy for any Resistance that contradicts the building of the state and does not [exist] in favor of the creation [of the state],” Gemayel said during a Joint Conference of the International Union of Democratic centrist parties and the Phalange party, entitled “Change in the Arab world: democracy and pluralism” in the Royal Hotel in Dbayeh , just north of the capital Beirut .

He was referring to the Iranian and Syrian-backed Hezbollah militant group.

Gemayel added: “No party operating under the excuse of resistance has the right to assume the role of the state in deciding the fate of the people.”

Gemayel stressed that “extremism leads to tragedies,” adding: “It should be resisted.”

Commenting on Arab uprisings, Gemayel said that the Middle East is witnessing “the dawn of a new Arab world .”

He also said that the Arab governments witnessing anti-regime protests “should respect the will of the people.”

He stressed the importance of stability being achieved after the success of the Arab revolts, hoping that the new regimes would respect the sovereignty of Arab nations and the demonstrators’ calls for democracy and freedom.