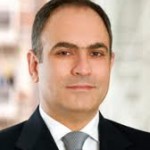 He said that these protests will “continue until the day of parliamentary elections in 2013.”

Aswad added: “We will take to the streets in the face of those who are pretending to protest against electricity cuts.”