Syria denounces Arab League for telling Assad to step down 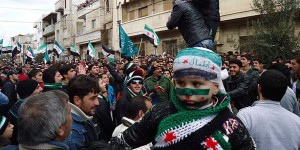 Syria on Monday rebuffed as a “conspiracy” an Arab League call for President Bashar al-Assad to step down in favour of a unity government to calm a 10-month-old revolt in which thousands of Syrians have been killed.

But a day after Arab ministers urged Assad to step aside, a senior Russian lawmaker said that Moscow could do little more to support the 46-year-old leader, opening the door to a policy shift by one of Syria’s few remaining powerful allies.

Mikhail Margelov said Russia’s veto last year, alongside China, of a Western-drafted U.N. Security Council resolution condemning Assad’s crackdown on months of protests was the “last instrument” Russia could use to support Assad.

“This veto has exhausted our arsenal of such resources,” Margelov was quoted as saying by Itar-Tass news agency.

In the Damascus suburb of Douma, tens of thousands of people turned out on Monday under the protection of rebel Free Syrian Army fighters to mourn 11 people killed by security forces, activists and a resident said.

Security forces, apparently keen to avoid a confrontation, stayed outside the area, where fighting had erupted overnight.

Lebanese Foreign Minister Adnan Mansour criticised the Arab League’s call for Assad to step down, saying its ministers had taken an “unbalanced” approach to the crisis by disregarding violence perpetrated by Assad’s opponents.

Damascus has not rejected the League’s decision to keep Arab observers in Syria one month longer, Mansour said, even though critics say their presence has not stemmed the bloodshed and only bought time for Assad to crush his opponents.

The Sudanese general who heads the monitoring mission said violence had dipped in the past month, contradicting accounts by Syrian activists who say at least 600 people were killed.

“After the arrival of the mission, the intensity of violence began to decrease,” Mohammed al-Dabi told a news conference at the Cairo-based Arab League, saying the monitors had logged only 136 deaths on both sides since they began work.

“Our job was to check what is happening on the ground and not investigate it,” said Dabi.

His role as chief monitor has displeased Assad’s critics given that he has held senior military and government posts in Sudan, including in Darfur, where the International Criminal Court prosecutor says the army carried out war crimes and the United Nations says 300,000 people may have died.

Saudi Arabia, an adversary of Syria’s ally Iran, undermined the mission’s credibility when it withdrew its own monitors on Sunday, accusing Damascus of defying an earlier Arab peace plan.

Responding to the new League plan unveiled in Cairo on Sunday, an official Syrian source told the state news agency SANA that the initiative, which told Assad to hand power to a deputy pending elections, was a “conspiracy against Syria”.

“Syria rejects the decisions of the Arab League ministerial council … and considers them a violation of its national sovereignty and a flagrant interference in its internal affairs,” the source said.

On the streets of Damascus there was little hope that the outside world could offer an end to the crisis. “I want stability and I want to work and see my children grow up. Can the Arab League achieve this for me? No,” said Mohammed Wahbi, a shopkeeper in Damascus.

“They are interfering in our affairs,” said Akeel Shehadi, another shopkeeper.

Rami Khouri, a Beirut-based commentator, said the unusually bold Arab initiative was clearly “bad news” for Assad, one of a string of authoritarian Arab leaders to face popular uprisings in the past year. Three have been overthrown.

“The fact that Arab countries would propose such a clear intervention and essentially order him to step aside and give him a mechanism to do so is quite a dramatic sign of how much credibility and legitimacy he has lost in the region,” he said.

The United Nations says more than 5,000 people have been killed by the security forces since an anti-Assad revolt began in March. The authorities say they are fighting foreign-backed “terrorists” who have killed 2,000 soldiers and police.

EU foreign ministers tightened sanctions against Syria on Monday, adding 22 people and eight entities to a list of banned people and groups, and said Assad’s repression was unacceptable.

“The message from the European Union is clear,” said the EU’s foreign policy chief, Catherine Ashton. “The crackdown must stop immediately.

Splits among the League’s 22 members have complicated its diplomacy on Syria, but in the end only Lebanon refused to approve the latest proposal, although Algeria objected to taking the plan to the United Nations Security Council.

Burhan Ghalioun, head of the main opposition Syrian National Council, welcomed the initiative, saying it “confirms that all Arab countries today consider the tyrannical regime of Bashar al-Assad to be finished and that it must be replaced”.

The U.N. Security Council is also divided on how to respond, with Western powers demanding tougher sanctions and an arms embargo, measures opposed so far by Russia.

A Western diplomat said the tough Arab League stance would put more pressure on Moscow to drop its objections to Security Council action against the Syrian leadership. “The Russians are not putting all their chips on Assad,” the diplomat said.

But in a sign Moscow’s close ties with Damascus, a Russian newspaper said that Russia has signed a deal to sell Syria nearly 40 fighter jet trainers.

The daily Kommersant cited a source close to Russia’s state arms export monopoly, Rosoboronexport, as saying that the sides had signed a contract after holding talks in December, and that Damascus was to pay $550 million for 36 Yak-130 aircraft.

Joshua Landis, a Syria expert at the University of Oklahama, said the Arab plan would extract no concessions from Assad and that the Security Council had no alternative strategy to offer.

“Without the credible threat of foreign intervention, Assad continues to feel confident that he can contain, if not beat, the opposition,” Landis said. “The United Nations is as divided over Syria as the Arab League is.”

Qatar has proposed sending Arab peacekeepers to Syria, but no other Arab country has shown any enthusiasm for this.

Syria, keen to avoid harsher foreign action, has made several moves to show it is complying with the initial Arab peace plan, which required an end to killings, a troop pullout from cities, release of detainees and a political dialogue.

The violence, however, has raged on unabated.

The opposition Syrian Observatory for Human Rights said seven civilians were killed on Monday and 12 the previous day.

Activists said an army deserter fighting for the Free Syrian Army had been killed in al-Quseir near the border with Lebanon.

SANA said three security personnel had been killed and 14 wounded in al-Quseir and one had died while trying to defuse a bomb in the eastern region of Deir al-Zor.

It said Brigadier-General Hassan al-Ibrahim and another officer were killed on Sunday when insurgents shot at their car in Damascus province. He was the third brigadier killed in a week. It said 11 people were also killed in an attack in Homs.