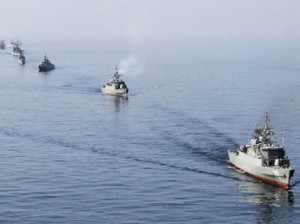 Tensions in the Gulf could reach a breaking point as a senior Iranian official said Iran would “definitely” close the Strait of Hormuz if an EU oil embargo disrupted the export of crude oil.

Mohammad Kossari, deputy head of parliament’s foreign affairs and national security committee, issued the warning in response to a decision by the European Union on Monday to impose an oil embargo on Iran over the country’s alleged nuclear weapons program.

“The pressure of sanctions is designed to try and make sure that Iran takes seriously our request to come to the table,” EU foreign policy chief Catherine Ashton said.

However, with Washington’s decision to deploy a second carrier strike group in the Gulf, the EU’s attempt to pressure Iran economically could greatly increase the likelihood of all-out war in the region.

The Strait of Hormuz is the vital link between the Persian Gulf and the Gulf of Oman.

It is also one of the most strategic chokepoints in the world when it comes to oil transit.

With world oil output estimated at some 88 million barrels per day in 2011, the US Energy Information Administration estimated that some 17 million of those barrels passed through the Strait.

If economic sanctions sufficiently pressure Iran to retaliate by closing down the Strait, nearly 20 per cent of worldwide oil trade would be impacted, resulting in a massive spike in global energy costs.

With over half a million regular forces and an additional 120,000 personnel in the country’s elite Revolutionary Guard, analysts believe the consequences of a US-led war against Iran would dwarf recent Western-backed military incursions the Middle East.

Thus far, the US decision to maintain two carrier strike groups in the region has been described as “a routine activity” by Iran.

But the vast US military buildup in the region, which was bolstered when the Pentagon dispatched an additional 15,000 troops to the neighboring nation of Kuwait, was only the latest step in an obvious attempt by Washington to strengthen its military capabilities in the region.

However since 1988, when the United States managed to destroy some 25 per cent of Iran’s larger naval capability during Operation Praying Mantis, Iran has spent the last two decades preparing its Revolutionary Guard naval forces to exploit the vulnerabilities of the United States’ larger conventional forces.

According to Revolutionary Guard commander Brigadier General Jafaari, “The enemy is far more advanced technologically than we are, we have been using what is called asymmetric warfare methods… our forces are now well prepared for it,” he said, as cited by Global Bearings.

Ultimately, the latest round of brinkmanship between Iran and the West may force Iran to the negotiating table over its uranium enrichment program.

However, the EU strategy of averting “chaos in the Middle East” by tightening the economic noose around Iran could spark the very conflagration it was ostensibly trying to avert.