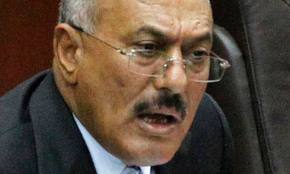 Ali Abdullah Saleh, Yemen’s outgoing president, who announced during a farewell speech that he will go the US for medical treatment has left the capital, a presidency official told the AFP news agency.

“The Yemeni president left Sanaa one hour ago,” the official said without specifying Saleh’s destination.

Another source close to Saleh said he left for the US via neighbouring Oman.

“God willing, I will leave for treatment in the United States and I will return to Sanaa as head of the General People’s Congress party,” Saleh was quoted by the state news agency, SABA, as telling a meeting with party officials on Sunday.

“I ask for forgiveness from all my people, men and women, for any shortcomings during my 33-year-long rule,” he added.

Meanwhile, tens of thousands of Yemenis staged protests against a law granting immunity for Saleh, from prosecution over a deadly crackdown on dissent.

The protesters carried banners during Sunday’s rallies in Sanaa calling on parliament members to reverse their decision.

“It is our duty… to execute the butcher,” chanted the protesters gathered in the Yemeni capital’s Change Square, the centre of the democracy movement that has been calling for Saleh’s removal since January last year.

The demonstrators tried to march to the US embassy but were stopped by Yemeni security forces.

“To the lawmakers, we say there will be no immunity at the expense of the blood of our martyrs,” the protesters said, referring to the hundreds killed in the government crackdown.

Saleh’s immunity is part of a Gulf Co-operation Council-brokered power transition deal aimed at ending the unrest in the country.

Early presidential elections are scheduled to be held on February 21.

Yemen’s parliament adopted the law on Saturday giving Saleh “complete” immunity from prosecution in return for stepping down.

The law offers partial protection from legal action for Saleh’s aides, saying they cannot face prosecution for “actions that were politically motivated and carried out in the exercise of their duties.”

The final text of the immunity law specified the amnesty “does not apply to acts of terrorism”, though no further details were revealed as to what actions may fall within that category.

The transitional government of national unity, which is led by the parliamentary opposition, had submitted eleventh-hour amendments on Friday reducing the scope of the amnesty offered to Saleh’s aides following a public outcry.

The UN envoy to Yemen, Jamal Benomar, has criticised the immunity law, arguing that it neglects the rights of “victims”.

Speaking before departing Yemen late on Saturday, Benomar said that though “the law was amended … it does not live up to our expectations.

“The UN in principle stands against this type of blanket immunity.”

Benomar further called on the Yemeni parliament to enact a “transitional justice and reconciliation” law that would allow victims to be heard and make claims for compensation.

He said the UN could not condone a broad amnesty that covers crimes against humanity, war crimes or gross violations of human rights.