Syria’s Zabadani is ‘liberated ’ but under siege

The residents of this pretty mountain resort town still seem dazed with disbelief that they have somehow succeeded in driving out the Syrian army, 10 months after they first rose up to demand change.

It was here that the government led by President Bashar al-Assad made what appeared to be a startling concession Wednesday. After negotiating with the town’s elders, the army agreed to withdraw from Zabadani, as well as from the adjoining town of Madaya, leaving a swath of territory effectively, if precariously, in the hands of the protest movement and rebel soldiers fighting in the name of the Free Syrian Army.

Quite how or why it happened — and whether the calm that has descended will last — are matters of debate. Some here credit the fight put up by the rebels, while others say that an Arab League mission to monitor the violence appears to have pressured a previously unrelenting government into backing down.

Zabadani is by no means the first town in Syria where protesters and residents have effectively seized control. But it is perhaps the only one where the government has been obliged to observe a cease-fire, giving the residents respite from what they said were daily shooting and artillery attacks, and raids in which activists were detained.

During a visit Saturday by some of the Arab League monitors, residents could not hide their joy that Zabadani has, at least for now, become what they are hailing as a “liberated city,” the first since the armed rebel force began taking shape in the fall.

“It’s similar to Benghazi,” said Suleiman Tinawi, a sergeant who defected from the army and joined the rebels eight months ago, reflecting a widely held hope that Zabadani will serve a role similar to that of the eastern Libyan city from which rebels launched the war that toppled Moammar Gaddafi, with the help of NATO air support.

The monitors’ visit offered a rare glimpse into the increasingly turbulent Syrian uprising, which is already evolving into an armed insurgency that many fear could spin out of control and become a full-blown civil war. On Saturday, there were reports of fierce clashes between rebel soldiers and army loyalists in the Damascus suburb of Douma, which hugs the edge of the capital. The official Syrian news agency SANA reported that 14 people had been killed when explosions struck a convoy carrying prisoners in the restive northwestern province of Idlib. 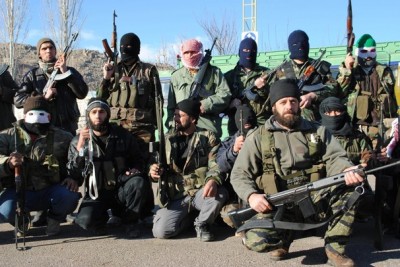 Activist groups said that about 60 bodies bearing marks of torture had been discovered in a hospital mortuary in Idlib, which borders Turkey and has emerged as a rebel stronghold. Videos posted on YouTube showed rows of disfigured, bloodied corpses, but who they were and how they died was unclear. Another 20 people were killed in protests and clashes around the country, activists said.

Zabadani is just 20 miles outside Damascus, which has so far remained mostly untouched by the protests roiling the country elsewhere, making its fall into rebel hands all the more striking. In calmer days, it was a popular summer destination for tourists from the Persian Gulf, who came to enjoy its cool climate and striking scenery.

Now, against a backdrop of snowcapped mountains, rebel soldiers of the Free Syrian Army wander in the streets alongside activists and protest leaders who previously dared make contact with the outside world only via secure Internet connections.

They talked about their hopes for freedom, their determination to overthrow the government and their yearning for international help. No guns were on display during the monitors’ visit, but defected soldiers and activists readily admit that they are armed and fighting.

“The people and the Free Syrian Army have become one hand,” said Amjad Khan, 31, who showed the monitors the damage inflicted on his home by an artillery shell fired by regular army soldiers days before the cease-fire was announced. “They are cooperating together.”

At an abandoned Syrian checkpoint strewn with shell casings, a resident pleaded with the monitors to ask the Arab League to send weapons.

“Each one of us who has a weapon is going out to defend our homes, and if we had enough weapons we could do more,” he said. The monitors took notes.

Liberated but under siege

The survival of this oasis remains in doubt, however. The army retreated about five miles but is still ringing the town. The mountainous terrain appears to give the advantage to a guerrilla force that clearly has the support of the local populace. But the residents are almost completely cut off from the outside world, unable to travel even to nearby Damascus to buy provisions.

“We are liberated, but we are under siege,” local activist Anas Burhan said. He suspects that the government agreed to the cease-fire only to mollify the Arab League, which is meeting Sunday to decide whether to renew the monitors’ mission for another month.

The Syrian opposition wants the league to refer the crisis to the United Nations, to secure a tougher international response to the Syrian government’s crackdown, something Damascus is anxious to avoid.

“After Sunday, they will start bombing again to regain their reputation,” Burhan said. “They only pulled out their tanks and hid them because of the Arab League.”

“They may start bombing us as soon as you leave,” added a farmer named Mohammed, who fretted that he had enough food stored away to last only another two months.

Yet the visit of the monitors suggested that the Arab League mission is making a difference, if only by illuminating at least some of the events that have been unfolding over the past 10 months almost entirely out of sight of the world.

Mothers approached the monitors with the names of missing sons, activists told of the abuses they suffered in detention, and people showed the damage done to their homes.

“This was the work of Hezbollah, Iran and the Shiites!” screamed a woman at a gracious villa high in the hills above town, pointing to wrecked furniture, broken crockery and smashed glass left behind by army soldiers who had used it as a base for shelling before they pulled out. Everyone in mostly Sunni Zabadani believes the Shiite Lebanese Hezbollah militia, which controls territory just across the border in Lebanon, is helping the government, and sentiments run high against Assad’s Shiite-affiliated Alawite sect, to which many officers in the security forces belong.

The monitors took more notes. Then they jumped back into their black Mercedes and headed out of town to meet their government security escort for the ride back to Damascus