No more Barbie dolls in Iran 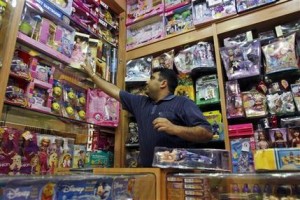 Police have closed down dozens of toy shops for selling Barbie dolls, part of a decades-long crackdown on signs of Western culture in Iran, the semiofficial Mehr news agency reported Friday.

Mehr quoted an unnamed police official as saying police confiscated Barbie dolls from toy shops in Tehran in a “new phase” of its crackdown against “manifestations of Western culture.”

Barbie dolls are sold wearing swimsuits and miniskirts in a society where women must wear head scarves in public, and men and women are not allowed to swim together.

A ban on the sale of Barbie dolls, designed to look like young Western women, was imposed in the mid-1990s.

In 1996, a government-backed children’s agency called Barbie a “Trojan horse” sneaking in Western influences like makeup and revealing clothes.

Authorities launched a campaign of confiscating Barbie dolls from toy shops in 2002, denouncing what they called the un-Islamic characteristics of the uniquely American doll. The campaign was eventually dropped.

Also in 2002, Iran introduced its own competing dolls – twins Dara and Sara – who were designed to promote traditional values with modest clothing and pro-family stories. But the dolls proved unable to stem the Barbie tide.

Even channels of Iran’s state TV broadcast several Western and Hollywood films every week. Islamists have repeatedly tried to fight what they see as a Western cultural “invasion” since 1979 Islamic Revolution that ousted a pro-Western monarchy.

Since then, importing Western toys has been discouraged by a regime that seeks to protect Iranians from what it calls the negative effects of Western culture.

In 2008, the Iranian judiciary warned against the “destructive” cultural and social consequences and “danger” of importing Barbie dolls and other Western toys.

Even so, Iranian markets have been full of Western toys aimed at Iranian children. One-third of Iran’s population of 75 million is under 15 years old.