Huge rallies on Friday across many Syrian cities 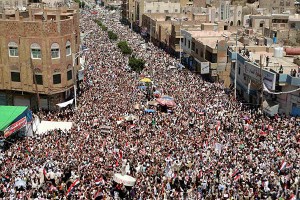 Protesters have rallied against the government in huge numbers across many Syrian cities, in a day dubbed the “Friday for revolutionary detainees”.

The demonstrations comes as Arab League peace monitors are set to meet with the bloc’s foreign ministers in Cairo on Sunday to decide their future course of action after the culmination of their one-month mission in the country.

Syria said that the league’s mission could be extended if both sides agree to it but acknowledged that at this point it is not up to Damascus to decide this.

There were reports of scattered violence in areas following Friday’s Muslim prayers.

The forces were out in full force as protests began in Aleppo, Latakia and Idlib, the British-based Syrian Observatory for Human Rights (SOHR) said.

A security officer, who had defected, was assassinated in Deraa, the SOHR said. Activists say at least twelve people were killed on Friday, including seven in Idlib.

Supporters of Assad also took out rallies in the capital Damascus.

Al Jazeera’s Zeina Khodr, reporting from neighbouring Lebanon, said: “Today the protests were in solidarity for those who remain in prison.”

Meanwhile, Ahmad el-Tayyeb, the grand imam of Cairo’s Al-Azhar, the highest seat of Sunni Muslim learning, urged “Arab rulers to take the necessary measures to halt bloodshed in Syria”, the state news agency MENA quoted him as saying on Friday.

The widely criticised league mission hangs in the balance as General Mohammed Ahmed Mustafa al-Dabi, its head, prepares to report to Arab foreign ministers, who will decide on Sunday whether to extend it for a second month.

Two senior Arab League senior officials told the Associated Press news agency on Friday that the organisation was likely to extend its monitoring mission, initiated to verify whether an Arab peace plan was working.

The officials said that the direction within the Arab League was to keep the mission in place as the international community was not yet ready for “escalation” to an intervention in Syria.

NATO’s most senior officer said on Thursday that the alliance was not planning or even “thinking” of intervening in Syria.

Critics say the Arab mission has only provided diplomatic cover for Assad to pursue a crackdown that has already killed more than 5,000 people by a UN count.

Burhan Ghaliun, the leader of the opposition Syrian National Council, also headed to Cairo to lobby the Arab ministers to refer the observer mission’s findings to the UN Security Council for tough action.

Hundreds of people have been killed since the monitors arrived in Syria, where an armed revolt has grown in recent months, contesting Assad’s grip on several parts of the country.

Some activists say as many as 740 civilians were killed in total during the last one month. One activist group, says security forces opened fire on protesters at least twenty times – sometimes while monitors were present.

That prompted one observer to quit, calling the mission “a farce”.