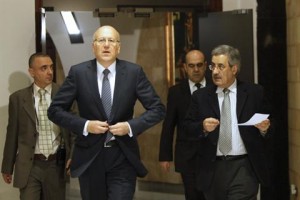 According to the newly approved plan, the minimum wage would become LL675,000 ( $450). This sum excludes transportation benefits

Under the new decree, the cabinet also canceled a LL200,000 increase approved by the government of former PM Fouad Siniora in 2008 as well as any wage boosts granted starting January 1, 2010.

The dispute during the cabinet session revolved around the issue of transportation benefits, with Nahhas demanding that it be added to the basic salary.

The issue was then put to the vote of cabinet, with 19 ministers voting against Nahhas’ plan and 10 minister voting in favor.

The cabinet also asked Nahhas to prepare a draft law under which the government would define the daily transportation allowance. Nahhas was also asked to submit a proposal on education benefits.

“The transportation allowance and education benefits will remain unchanged until a new law is issued,” Information Minister Walid al-Daouq told reporters after the session.

Earlier in December the minimum wage was raised by the cabinet to 600,000 LL, ($400) but the labor Union was not happy with the increase and called for a strike .

This is the fourth time that the cabinet discusses the issue .