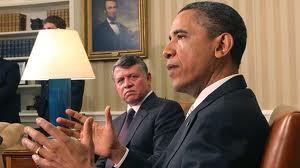 “We’re continuing to see unacceptable levels of violence inside that country, and so we will continue to consult very closely with Jordan to create the kind of international pressure and environment that encourages the current Syrian regime to step aside,” Obama said after White House talks with Jordan’s King Abdullah.