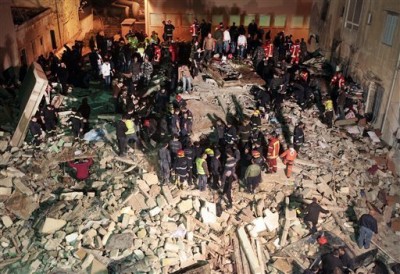 At least Nineteen people were killed when a residential building collapsed in Beirut and rescue workers were searching on Monday for people believed still buried under the rubble, Lebanese officials said.

The head of the General Security Department, Brig. Gen. Raymond Khattar, said that by Monday afternoon the bodies of seven Lebanese, seven Sudanese, three Filipinos and two Egyptians were retrieved from the rubble of the apartment building in the neighborhood of Fassouh that was built in the 1940s.

The five-story building collapsed in the Ashrafiyeh district of the Lebanese capital on Sunday evening.

“We are hoping to find people alive. There are still some missing,” Ali Hassan Khalil, the health minister told LBC television.

Eleven others were rescued and taken to nearby hospitals a day earlier. No survivors were found during rescue efforts on Monday.

Around 14 people were still missing. But rescuers began facing a new hurdle in the afternoon after heavy rains in the area.

PM Najib Mikati ordered yesterday the formation of a team of experts to probe the incident .

Authorities are now questioning Michel Saadeh the owner of the building to find out whether the incident was due to his negligence or the construction of an adjacent new building .

A resident who escaped with her mother said the building was extremely run-down and the owner had recently warned tenants to move out.

The apartment block, in Beirut’s eastern Ashrafiyeh district, came crashing down without warning on Sunday evening

Neighbors said dozens of people had lived in the building.

Among the dead was a 15-year-old girl

“It was like an earthquake” when the block collapsed, one witness told the local MTV channel.

Charbel said it was essential to carry out a survey of similar buildings across the country, many of which were built illegally or had several floors added without proper permits.