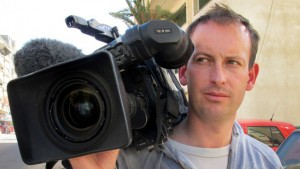 BEIRUT , Lebanon- A mortar attack in the restive Syrian city of Homs killed at least eight people Wednesday, including a French cameraman who became the first Western journalist to die in the violence engulfing the country’s 10-month-old uprising.

Hours earlier, President Bashar al-Assad had made his second public appearance in as many days, turning up unexpectedly at a demonstration in central Damascus to promise his supporters that the revolt will soon be crushed.

The death of Gilles Jacquier, 43, who worked for the France-2 television network, was quickly seized on by both sides in the conflict as evidence to support their dueling narratives.

Jacquier, a veteran of the wars in Iraq and Afghanistan, was traveling with a group of journalists on an official government tour when three mortar rounds or rockets exploded near their vehicle in the staunchly pro-regime Ikrima neighborhood of Homs. The victims were among 28 people killed across Syria, 13 of them in Homs, according to the Syrian Revolution General Commission, an opposition group that both organizes and monitors anti-government protests.

Homs has emerged in recent months as the violent epicenter of the uprising, a patchwork of pro- and anti-regime neighborhoods in which residents on both sides have taken up arms. Hundreds have died there since the revolt erupted last March, including protesters shot dead by security forces at anti-government demonstrations, civilians killed in government shelling of opposition strongholds and, in recent months, security forces and government supporters attacked by armed members of the opposition.

But the circumstances and timing of Tuesday’s attack highlighted the murky complexities of the escalating violence, with both sides trading accusations of responsibility.

The Syrian government said the attack offered proof that the opposition is armed and dangerous. According to the official SANA news agency, nine people died when an “armed terrorist group” fired the mortars as the journalists were interviewing residents and inspecting damage caused by previous attacks.

Opposition groups said it would have been impossible for the rebels to stage such an attack in the pro-regime neighborhood, which is populated mostly by members of the same Alawite minority as the president. A statement by the Homs Revolutionary Council accused the government of firing the rockets to “serve its own interests” and tarnish the reputation of the protest movement.

The grim aftermath was captured by the pro-government Al-Dunia television network, which showed cameramen rushing to the scene of one explosion when another mortar explodes, leaving at least three people crumpled on the ground. The footage then shows the body of the French journalist stuffed into the back of a taxi.

Few Western journalists have been granted access to Syria since the uprising began, but in recent days, the government has begun issuing visas, in part to comply with the terms of an Arab League peace initiative that calls for the media to be admitted, along with other steps.

But the peace plan is clearly faltering amid evidence that the death toll has only risen since the dispatch of Arab monitors to observe the violence.

U.S. Secretary of State Hillary Clinton said that the monitoring mission “should not continue indefinitely.”

“We cannot permit Assad and his regime to have impunity,” she told reporters during a visit to Washington by Sheikh Hamad bin Jassim al-Thani, the Qatari prime minister, who has led the Arab effort to isolate and sanction Assad.

Assad’s belligerent speech Monday, in which he pledged to crush the uprising with an “iron fist,” further cast into doubt the sustainability of the mission. At his brief appearance in Ummayed Square in Damascus on Tuesday, he rallied thousands of supporters with promises that the government soon would triumph.

“We are going to win,” said Assad, who was accompanied by his wife, Asmaa. “Now the conspiracy is dying … and it is the end of their plot.”