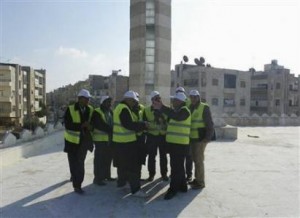 An Arab monitor said on Wednesday he might quit a fraying Arab League team of observers in Syria because the mission was proving ineffectual in ending civilians’ suffering there, exposing rifts in an Arab peace effort.

His comments come a day after Anwar Malek, an Algerian observer, told Al Jazeera TV he had quit Syria because the peace mission was a “farce.”

Malek’s departure was a blow to the mission, already criticized by Syria’s opposition as a toothless body that only served to buy President Bashar al-Assad time.

Its work has already been hampered by an attack on monitors in the western port of Latakia this week that lightly wounded 11 and prompted the League to delay sending new observers to Syria to join about 165 already there.

Another resignation would further undermine its credibility.

“The Syrian authorities have exploited the weakness in the performance of the delegation to not respond. There is no real response on the ground.”

The monitor, speaking by telephone from Syria, asked not to be named as he was not authorized to speak to the media.

“The military gear is still present even in the mosques. We asked that military equipment be withdrawn from the Abu Bakr al-Siddiq mosque in Deraa and until today they have not withdrawn.”

The Arab League monitoring mission began work on December 26. Its task is to verify if Syria is complying with an agreement to halt a crackdown on 10 months of protests against Assad in which the United Nations says more than 5,000 people have been killed.

A U.N. official told the Security Council on Tuesday that Syria had accelerated its killing of protesters after the Arab monitors had arrived.

Assad mocked the Arab League in a 100-minute speech in which he said that it had failed for six decades to promised to take a position in Arab interests. He said he would strike down a revolt he slammed as foreign plot.

The choice of a Sudanese general to head the mission had already alarmed opposition activists who say Sudan’s own defiance of a war crimes tribunal means the monitors probably will not recommend strong action against Assad.

The monitor said the Syrian authorities had shown little genuine willingness to comply with the plan while the observers lacked the expertise to do their mission justice.

“There is oppression. There is strong oppression and there is suffering, a lot of suffering, more than you imagine,” he said, describing one part of the central city of Homs he had visited.

“This is a very big problem and it is related firstly to the general will of the Syrian authorities to cooperate with the delegation in a genuine manner and without maneuvering,” he said.

“Secondly, it is related to the expertise of the delegation… It needs experts in the fields of monitoring, of diplomacy, of international law.”

While an Arab League meeting on Syria said on Sunday it remained committed to the mission, the observer said that individual monitors were thinking of quitting, either fearing for their lives or frustrated at failing to make a difference.

Adnan Khodeir, head of the League’s monitoring operations room, said the observers could resume work on Thursday after not going out for two days following the Latakia attack. “All the monitors are well, and there are no problems,” he said.

Under the Arab peace plan, Syrian authorities were supposed to stop attacking peaceful protests, withdraw troops and tanks from the streets, free detainees and open a political dialogue.

The monitor said those promises had not been met, with the Syrian military still present in cities, even in residential areas, while it was difficult to verify, for instance, if political prisoners had genuinely been released.

Malek accused Syria of war crimes and torturing prisoners. The Arab League, which suspended Syria in November for failing to halt the crackdown, disputed Malek’s account, saying illness had stopped him carrying out his work.

The monitor said Malek may have had contacts with some Syrian opposition members, but they had visited Homs together.

Monitors had been allowed to visit any area they chose, but Syrian authorities had refused to accompany them in particularly tense neighborhoods, forcing them to make a decision to either stay away or take the risk of going in alone, said the monitor.

He arrived in Syria on December 27 and has visited Homs, Damascus and Deraa. The Bab Amr area of Homs was in a particularly dire way, he added.

Syria has barred most independent media, making it difficult to verify conflicting accounts of events on the ground.

The country says it is facing a wave of terrorism by Islamists and conspirators who are armed and manipulated from abroad and have killed 2,000 members of the security forces.

But the monitor said he had seen no evidence of this.

“We did not feel afraid or threatened while talking to them. In all the areas we went to, we did not meet any gunmen, unless they had hidden their guns,” he said. “What we found were citizens in their homes who spoke of their suffering.”