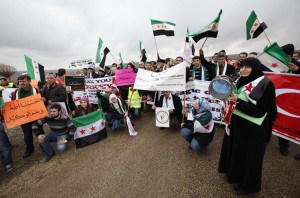 Organizers say Syrian authorities have barred hundreds of activists from crossing into the country to deliver aid to victims of the Syrian regime’s deadly crackdown on anti-government dissidents.

About 200 activists, mostly Syrians traveling from countries that include Bulgaria, the Netherlands, France, and the United States, gathered on the Turkish side of the border Thursday to protest the violence and deliver truckloads of food, medical aid and other supplies.

Bilal Dalati, a spokesman for the Freedom Convoy group, said Syrian authorities would not allow the convoy nor the aid in.

The United Nations estimates more than 5,000 people have died since March in Syria’s crackdown.

Turkey, which shares a 900km long border with Syria, is hosting several thousand refugees, including members of the rebel Syrian Free Army, at camps, while the opposition Syrian National Council meets regularly in Istanbul.

Convoy member Samir Jisri, a 35-year-old computer graphics teacher from Toronto, said he wanted to return to the country he left as an infant.

“The Syrian revolution is an orphaned revolution because nobody is sticking up for it, not even the Arab League. The last hope we have is Turkey.”

Moayad Skaif, a 30-year-old Syrian journalist from Qatar, who was on one of the coaches, said: “We want to go to Syria to show to the whole world what is happening in Syria. Assad does not want the truth to come out.”