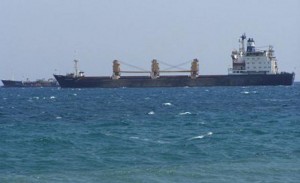 A Russian ship, allegedly carrying tons of weapons, made a dash for Syria after Cypriot officials allowed it to leave their waters, Turkish officials said Thursday.

The ship had made an unscheduled stop in Cyprus Tuesday, technically violating an EU embargo on arms shipments to Syria, which has killed thousands in a crackdown on dissent.

Cypriot officials — told by the ship’s owners it was heading for Syria and Turkey — only allowed the ship to leave Wednesday after the owners said it had changed its destination for Turkey only.

But Turkish Foreign Ministry spokesman Selcuk Unal — citing information from the Turkish navy — said the ship had docked Thursday at the Syrian port of Tartus, which Russian warships use as a resupply stop.

The St. Vincent and Grenadines-flagged ship, the Chariot, had apparently turned off its tracking device and the information could not be independently verified.

The vessel, owned by St. Petersburg-based Westberg Ltd, had initially dropped anchor off the southern Cypriot port of Limassol due to high seas, drawing the attention of local officials who boarded to examine its cargo.

They could not open and inspect four containers in the hold because of “the confined space” they were stored in, the Cypriot Foreign Ministry said Wednesday, but officials nevertheless determined they were holding a “dangerous cargo.”

The spokesman said the cargo was listed as “dangerous” in the ship’s manifest, but no further details were available.

Turkey, which has become Syrian leader Bashar Assad’s strongest critic, has imposed a trade and arms embargo on its southern neighbor.