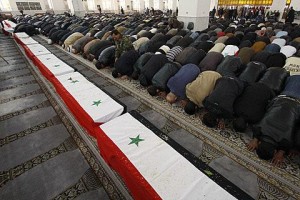 Syria was tense Saturday as the families of the victims of a suicide bombing in the capital and lethal clashes elsewhere began to bury their dead, and as Syria’s Christians celebrate Orthodox Christmas.

Crowds were flocking to a central square Saturday to condemn the suicide bombing in the al-Midan quarter of Damascus a day earlier, the Syrian Arab News Agency said.

Meanwhile, Syrian state TV broadcast footage of the coffins of some of those killed in the attack being carried into mosques, accompanied by grieving relatives.

At least 26 people died and at least 63 people were injured in the suicide strike, SANA said, with most of the casualties civilians and some law enforcement personnel.

The Syrian Interior Ministry vowed to “strike with an iron fist” anyone who threatened the nation’s security, after what was the second such bombing in the capital in two weeks.

Car and suicide bombings have long been common in the wars in Iraq and Afghanistan. But this development in Syria, similar to the strikes carried out December 23 on government security targets, deepened the fears of full-blown warfare in the nation.

At least 10 people were killed in clashes with security forces Saturday, five in the Damascus suburbs, four in Homs and one in Daraa, the Syrian Revolution General Commission, an opposition activist group, said.

The London-based Syrian Observatory for Human Rights said one man had died Saturday in Homs when he was hit by random gunfire as he stood in front of his home.

A day earlier, 35 people were killed as security forces confronted protesters in the Damascus suburbs and the provinces of Homs, Hama, Idlib and Daraa, activists said.

The apparent suicide attack and the clashes across Syria occurred as Arab League monitors are in the country to determine whether the Syrian government is abiding by an agreement to end its 10-month crackdown against protesters.

The Arab League said Friday it will increase the number of monitors in Syria over the next few days from 100 to 150 people. The monitors’ presence since last week has failed to decrease the violence.

The Arab League is due to meet Sunday in Cairo to discuss the mission.

A statement issued on behalf of Ban Ki-moon said the secretary-general “condemns the terrorist bombing” and “reiterates that all violence is unacceptable and must stop.”

The attack was “part of the conspiracy against Syria, as the terrorist acts coincided with the statements made by the so-called opposition outside Syria and the French and US officials,” the party leadership is quoted as saying.

The Damascus bombing came a couple of days after the Free Syrian Army — the force of military defectors fighting the al-Assad regime — vowed to kick off “huge operations” against government targets.

No one has claimed responsibility, but one high-ranking Free Syrian Army officer denied blame and said regime forces conducted the blast.

“The explosion in Damascus today is the work of the Syrian intelligence because they had information that a massive protest was planned in the al-Midan district,” said Lt. Col. Mohamed Hamado.

The opposition Syrian National Council blamed the regime for sowing “chaos” and diverting attention from its own “crimes of murder and torture.” It said the regime “bears the full responsibility for both the explosion and its perpetrators.”

One activist from the al-Midan neighborhood told CNN that despite the explosion and heavy security presence, thousands of people turned out to join anti-government demonstrations later Friday. Abu Yassir, a pseudonym for the 22-year-old activist, said security forces arrested at least 50 people, including a 10-year-old boy who was beaten at the time of his arrest.

Estimates of the death toll during the months-long protests and crackdown have ranged from more than 5,000 to more than 6,000.

Activists blame the killings on the government, but al-Assad’s regime says it is putting down armed terrorists, whom it blames for the bloodshed.

CNN cannot independently confirm events inside Syria because the government has restricted activities by international journalists.

Photo: Syrian mourners pray in front of the coffins of 11 Syrian police officers who were among those killed in an explosion in the Midan district of Damascus Friday, during a mass funeral at Al-Hassan mosque in the Syrian capital Saturday, January 7, 2012.