Arab League may call on United Nations to help in Syria 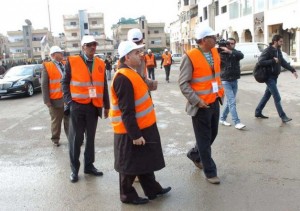 Arab foreign ministers meet Sunday to discuss whether to ask the United Nations to help their mission in Syria which has failed to end a 10-month crackdown on anti-government protests in which thousands have died.

The proposal by Qatar is to invite U.N. technicians and human rights experts to help Arab monitors assess whether Syria is honoring a pledge to stop its crackdown, sources at the Arab League said. A source said it might request that U.N. staff helping the mission be Arabs.

The foreign ministers, who will consider an initial report by the monitors, will also discuss measures to allow the mission to operate more independently of the Syrian authorities, media sources at the League said.

The violence has continued since the monitors began working in Syria on December 26, with scores of people reported killed.

Qatari Prime Minister Sheikh Hamad bin Jassim al-Thani said Syria was not implementing the deal and monitors could not stay in Syria to “waste time.” The Syrian army had not withdrawn from cities and there had been no end to the killing, he said.

Sources at the Arab League said ministers were likely to reaffirm support for the monitors, resisting calls to end what Syrian pro-democracy campaigners say is a toothless mission that merely buys more time for President Bashar al-Assad to suppress his opponents.

Syria said it was providing the monitors with all the facilities they needed. “What we are looking for is objectivity and professionalism,” Foreign Ministry spokesman Jihad Makdesi said last week.

No one should “rush to verdicts” on the mission’s achievements, said the head of the monitoring operations room at the League’s headquarters in Cairo, Adnan al-Khudeir. He said the commission overseeing the monitors had the League’s full support.

The United Nations says more than 5,000 people have been killed in the uprising against Assad. The Free Syrian Army, an armed opposition force composed mainly of army deserters, has joined the revolt. The Syrian government says “terrorists” have killed 2,000 members of the security forces during the uprising.

Syria’s interior minister said a suicide bomber killed 26 people in Damascus Friday and vowed an “iron fist” response. Some in the opposition said the government had staged the attack to undermine the pro-democracy movement.

The 22-member Arab League suspended Syria in November after months of silence over the crackdown. But some Arab leaders are uncomfortable about targeting one of their peers given their own restive populations, diplomats say.

Syria has been a major regional player, allied with Iran and the Lebanese Shi’ite Hezbollah group.

Western powers that want Assad to step down to allow for democratic reforms welcomed the League’s tougher stance toward Syria. But Arab states have stressed their opposition to any foreign military intervention like that which helped topple Libya’s Muammar Gaddafi last year.

A U.N. spokesman said Sheikh Hamad and Ban discussed what practical measures the United Nations could use to help the observer mission, possibly training for League observers under the auspices of the U.N.’s High Commissioner for Human Rights.

The League has given the monitors one month to assess whether Assad has followed its plan to end the violence by withdrawing the military from Syrian towns and cities.

More monitors with varied skills and experience are due in Syria in the coming week, taking the number to 150 who will deploy to all Syrian cities, according to the League.

Assad’s opponents said the monitors did not have enough access and were escorted by Syrian officials who were manipulating them and hiding prisoners in military facilities.

League Secretary General Nabil Elaraby said this week there was still work to be done to honor the agreement between the League and Syria, which also stipulates the release of thousands of prisoners detained since the uprising began in March.

Foreign ministers of Saudi Arabia, Egypt, Qatar, Oman, Sudan and Algeria or their representatives are due to attend Sunday’s meeting in Cairo. This would give overwhelming weight to the committee’s decisions because other League states tend to follow the lead of Saudi Arabia or Egypt.

Syria bars most independent journalists from the country, making first-hand reporting impossible, but a BBC Arabic service reporter was allowed to accompany three Arab monitors to a town on the outskirts of Damascus.

It was the first time foreign media were known to have been able to cover the activities of the monitors directly, although media access was a condition stipulated by the Arab League.

The BBC said it had been able to film, unhindered by the security forces.

Protesters and residents told the observers, all Algerian diplomats, of harsh treatment at the hands of the security forces. The observers then witnessed a demonstration in which the crowd demanded Assad’s execution, the BBC said.