Blue Line may be extended to borders with Syria, report 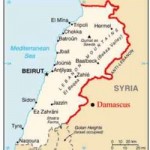 Terje Roed-Larsen, the Special Envoy for the implementation of UN Security Council resolution 1559 may propose during his upcoming visit to Lebanon the deployment of the U.N. Interim Force in Lebanon along the border with Syria, according to a report by the Kuwaiti al-Qabas newspaper on Saturday.

Larsen reportedly considers such a move an attempt to limit the smuggling of arms across the Lebanese-Syrian border.

Larsen reportedly also believes that the deployment may also prevent Lebanon from becoming an open ground for terrorists to infiltrate Syria.

Resolution 1559 , which was established in 2004 calls for demarcating the Lebanese-Syrian border and disarming militias in Lebanon.