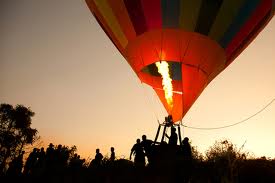 A hot air balloon carrying 11 people turned into a tower of “sheer flame” Saturday after hitting power lines in a rural area of New Zealand, killing everyone aboard and horrifying residents.

It was New Zealand’s deadliest air accident in nearly 50 years. Two of those killed jumped out of the basket in desperation before the fiery balloon hit the ground with a loud bang. It crashed into farmland near the township of Carterton, a region well known for its hot air ballooning.

The pilot and five couples were killed. Some of the bodies were badly burned, said Superintendent Mike Rusbatch, a police district commander in Wellington, the capital. The early morning weather was clear and bright with minimal wind.

Rusbatch said it appeared the balloon’s basket struck power lines that ignited a fire on board. Witnesses told local media they saw 32-foot high flames rising from the basket.

The burning balloon was just above the trees when David McKinlay saw it as he watered his garden.

“It looked like he (the pilot) tried to raise it a bit higher … all of a sudden there was just 10 meters of flames,” he said.

The balloon rose to 500 feet before dropping quickly and turned into “just a sheer flame as it hit the ground” with a big bang, McKinlay said.

Rusbatch, the police commander, said two people jumped from the basket before it hit the ground, but did not survive.

The only victim publicly identified so far is the pilot and balloon owner, Lance Hopping. He was safety officer for the Balloons over Wairarapa annual event, and was considered an experienced and safety-conscious pilot.

New Zealand’s Transport Accident Investigation Commission opened an immediate inquiry. Investigating officer Peter Williams said investigators had looked at the crash site but had yet to begin witness interviews. The investigation could take up to a year, he said.

The crash was the deadliest air disaster in New Zealand since 1963, when a DC-3 airliner crashed in the Kaimai Range, killing all 23 passengers and crew aboard, according to the New Zealand Ministry for Culture and Heritage.

In 1979, an Air New Zealand DC-10 airliner on a scenic flight slammed into Mount Erebus in Antarctica, killing all 257 people on board.