A Syrian army Colonel has defected with soldiers 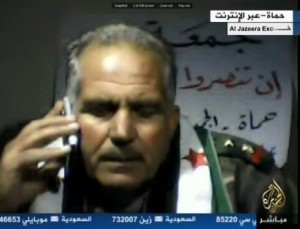 A Syrian military official has defected in protest at a government crackdown on months of demonstrations against President Bashar al-Assad’s rule, footage on Al Jazeera English’s website showed on Saturday.

Flanked by soldiers brandishing rifles, a man named by Al Jazeera as Colonel Afeef Mahmoud Suleiman read out a statement saying they were defecting after witnessing acts of violence by the army on protesters.

“We soldiers have defected from this army after watching the military and security forces killing protesting civilians with all kinds of weapons,” said Suleiman, whom Al Jazeera said was from the army’s air force logistics division in the city of Hama.

Al Jazeera reported that up to 50 soldiers had defected along with Suleiman. Thirteen men dressed in camouflage could be seen standing behind him in the video. 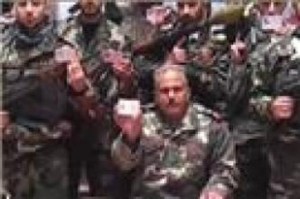 The pan-Arab satellite channel also said on its website the soldiers had decided to protect protesters in Hama and quoted Suleiman asking Arab League observers to visit areas affected by “air raids and attacks”. The comments were not made in the clip broadcast on the website.

A team of Arab League monitors arrived in Syria last week to verify whether the government was implementing a plan to scale back its military presence and free thousands of prisoners detained during the unrest.

Suleiman also invited the monitors to “uncover three cemeteries in Hama filled with more than 460 corpses”, according to Al Jazeera.

The United Nations says more than 5,000 people, many of them peaceful protesters, have been killed since the uprising began in March.

The Syrian government says it is facing an armed insurgency and that what it calls “terrorists” have killed 2,000 members of the security forces.

There was no independent confirmation of the soldiers’ defection. Syria bars most independent journalists from the country, making first-hand reporting difficult.