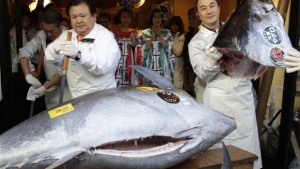 This tuna is worth savoring: It cost nearly three-quarters of a million dollars.

A bluefin tuna caught off northeastern Japan fetched a record 56.49 million yen, or about $736,000, Thursday in the first auction of the year at Tokyo’s Tsukiji fish market. The price for the 593-pound (269-kilogram) tuna beat last year’s record of 32.49 million yen.

The price translates to 210,000 yen per kilogram, or $1,238 per pound – also a record, said Yutaka Hasegawa, a Tsukiji market official.

Though the fish is undoubtedly high quality, the price has more to do with the celebratory atmosphere that surrounds the first auction of the year.

The winning bidder, Kiyoshi Kimura, president of Kiyomura Co., which operates the Sushi-Zanmai restaurant chain, said he wanted to give Japan a boost after last year’s devastating tsunami.

“Japan has been through a lot the last year due to the disaster,” a beaming Kimura told AP Television News. “Japan needs to hang in there. So I tried hard myself and ended up buying the most expensive one.”

Kimura also said he wanted to keep the fish in Japan “rather than let it get taken overseas.”

This year’s record tuna was caught off Oma, in Aomori prefecture and just north of the tsunami-battered coast.

Bluefin tuna is prized for its tender red meat. The best slices of fatty bluefin, called “o-toro” here, can sell for 2,000 yen ($24) per piece at Tokyo sushi bars.

A Sushi-Zanmai shop in Tsujiki was selling fatty tuna sushi from the prized fish for 418 yen ($5.45) apiece Thursday.

“It’s superb. I can do nothing but smile. I am very happy,” said Kosuke Shimogawara, a 51-year-old customer, who pointed out that if sold at cost, each piece of sushi could cost as much as 8,000 yen ($96).

“It’s unbelievable. President Kimura is so generous. I have to say thank you to him,” he said.

In November 2010, the International Commission for the Conservation of Atlantic Tunas voted to cut the bluefin fishing quota in the eastern Atlantic and Mediterranean by about 4 percent, from 13,500 to 12,900 metric tons annually. It also agreed on measures to try to improve enforcement of quotas on bluefin.

The decision was strongly criticized by environmental groups, which hoped to see bluefin fishing slashed or suspended.