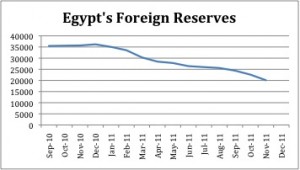 Egypt’s international reserves fell for a 12th month in December, sending bond yields to a record high and fueling investor concerns about a currency devaluation.

Reserves declined to $18.1 billion from $20.2 billion in November, the bank in Cairo said today on its website. They stood at $36 billion a year ago, before the start of the revolt that ousted President Hosni Mubarak. Central bank support has helped cushion the impact of political turmoil on Egypt’s pound.

“The acceleration in reserve loss is very alarming and just pushes Egypt that much closer to a full blown balance of payments crisis,” said Raza Agha, a senior Middle East and North Africa economist at the Royal Bank of Scotland in London. “Clearly, the pace of reserve loss is not sustainable, and only increases pressure on them to quickly get multilateral and bilateral donors on board.”

Tourists and investors have shunned Egypt since protests began almost a year ago. Political tensions persisted after Mubarak’s February ouster, with frequent clashes between demonstrators and security forces. While elections that began more than a month ago for Egypt’s first post-Mubarak parliament have been largely peaceful, renewed violence in December in central Cairo left at least 17 people dead.

International investors sold $7.5 billion in Egyptian treasury bills and bonds in the first nine months of 2011, as borrowing costs surged to record levels.

The central bank said in a Dec. 6 statement that it “continues to safeguard an orderly foreign-exchange market” as it has since the inter-bank market started in December 2004. Then-Deputy Governor Hisham Ramez said in June that the bank hadn’t intervened in the foreign-exchange market since Feb. 8, and doesn’t target a level for the pound.

The pound’s decline of 3.9 percent in 2011 was smaller than most emerging market currencies tracked by Bloomberg, including those of India, Turkey, Poland and Brazil. It traded unchanged at 6.0329 per dollar at 3 p.m. in Cairo today. Forward contracts show investors expect a 15 percent drop over the next year.

Yields on the country’s benchmark dollar bonds maturing in 2020 jumped 18 basis points, or 0.18 percentage point, to a record 8.25 percent. The government canceled an auction of pound-denominated bonds on Jan. 2 as investors demanded yields of more than 16 percent.

“It’s a bigger drop than the market had expected and underscores the toll that political tensions continue to take on the Egyptian economy,” said Simon Williams, the Dubai-based chief economist for the Middle East and North Africa at HSBC Holdings Plc. The drop will add to expectations that “the Egyptian pound will weaken from here on.”

Egypt has signaled it may resume talks with the International Monetary Fund on a $3.2 billion loan that it turned down in June. The government asked the fund to delay a mission visit that was planned for this week “by a few weeks,” Fayza Aboulnaga, minister of planning and international cooperation, said on Jan. 2.

Even that sum “will not be enough at this reserve level to turn around investors’ bearish views” and get investment flowing back to Egypt, said Alia Moubayed, a London-based senior economist at Barclays Capital. The government must focus on “restoring security which is necessary for the return of tourists, growth and investments,” as well as reducing the budget deficit and securing external funds, she said.

Prime Minister Kamal el-Ganzouri has complained that money promised by Arab and Western countries hasn’t been delivered. Egypt received $1 billion in aid from Saudi Arabia and Qatar, out of at least $7 billion pledged by the six-nation Gulf Cooperation Council, the premier said on Dec. 22. “Nothing has arrived” out of $35 billion pledged for Egypt and Tunisia by the Group of Eight major economies, he said.

The government says it’s working to rein in the budget deficit and has raised energy prices for some industries by about 33 percent.