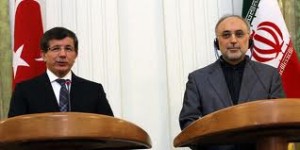 Iran’s foreign minister said Thursday that Turkey is the best place for further talks with world powers about Iran’s nuclear program, according to a report carried by an Iranian news agency.

The report by the semiofficial Isna agency said Ali Akbar Salehi expressed Iran’s agreement after Turkey announced its readiness to host the talks. He was speaking at news conference with his visiting Turkish counterpart, Ahmet Davutoglu.

The invitation comes in after new Western sanctions over Tehran’s uranium enrichment program. The U.S. and others charge Iran is aiming for nuclear weapons. Iran says its nuclear program is for peaceful purposes.

“We are always ready for these hostile sanctions and we are not concerned about them,” Isna quoted Salehi as saying about sanctions on oil and Iran’s central bank. “Necessary plans are in place and we will safely overcome” the current sanctions, as well, he said.