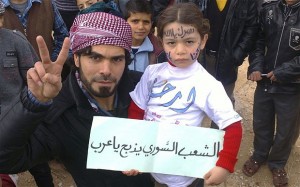 Syria’s government has gone back on a pledge to release hundreds of political prisoners from its jails, according to a human rights group.

The government had promised to release more than 700 detainees from jails last week as part of a peace plan drawn up by the Arab League.

Under the plan monitors have also been allowed to observe confrontations on Syria’s streets between protesters and security forces. More than 5,000 people have died since massive demonstrations against the regime started in March, including large numbers of protesters killed by security forces.

Thousands are also believed to have been detained, and the names of several hundred of them were given to the government with a request to let them out.

But despite agreeing, only 13 have been released, according to Avaaz, an organisation which monitors Syria through a network of campaigners operating outside the clutches of the notorious secret police.

“Our information is that only 13 named prisoners have been released,” said spokesman Will Davies.

“Making this promise to release more than 700 is another case of regime stalling tactics as the regime plays for time and tries to placate the Arab League.”

If the Arab League decides that the Syrian government is not sticking to its agreement, greater international pressure on the regime is likely to follow.

At least six people were killed in attacks on protests on Saturday, including one in Damascus, according to the Local Coordination Committees, an activist group. A day earlier, regime forces A day earlier, at least 27 were killed.

An amateur video released late on Friday showed one Arab League observer telling protesters in the southern city of Daraa, where the uprising began, that he saw snipers with “our own eyes and we call upon (Syrian) authorities to withdraw them.”

The observer, wearing an orange jacket and speaking with a north African Arab accent, is heard saying if they snipers are not withdrawn within 24 hours “there will be other measures.”

Human Rights Watch has also drawn attention to the plight of prisoners, claiming that the regime has hidden hundreds from monitors in military bases where they cannot go under the terms of their agreement with the government.

The Arab League mission has been criticised by anti-regime activists as toothless, but vast numbers of protesters have turned out on Syria’s streets since the monitors started work on Tuesday.

Protesters have said they are determined to use a chance to show their strength of feeling, and many hope that the presence of monitors will protect them from vicious attacks by security forces who routinely gun down dozens of people.

Activists claim that as many as half a million people demonstrated on Friday throughout the country, perhaps the biggest number ever, including 150,000 in Damascus which until now has only seen small demonstrations.

The Syrian Observatory for Human Rights, a British-based watchdog group, claimed at least 32 people died on Friday including 25 protesters who were shot dead. They said security forces used “nail bombs” against crowds.

Armed supporters of the demonstrators said on Saturday that they have suspended attacks on security forces while the monitors are in Syria.

On Saturday two of the main opposition groups attempted to show a united front and draw up a transition plan for after President Assad’s fall.

The opposition Syrian National Council (SNC) and the National Coordination Body for Democratic Change in Syria (NCB) signed a deal late on Friday.

A statement from the NCB said the deal “sets out the political and democratic rules for the transitional period.”

Unlike Libya, whose revolutionaries managed to quickly form a reasonably united and coherent government-in-waiting, opponents of President Assad have been fragmented and lacking in a convincing strategy.

Photo: In a renewed show of strength, demonstrators, young and old, protesting against Syria’s President Bashar al-Assad march through the streets of Ma’arrat al-Numan, south of Aleppo. The poster reads : “Syrian people are being massacred oh Arabs!”