U.S. in $3.5 billion arms sale to UAE amid Iran tensions 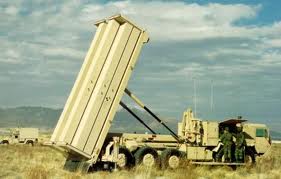 The United States has signed a $3.5 billion sale of an advanced antimissile interception system to the United Arab Emirates, part of an accelerating military buildup of its friends and allies near Iran.

The deal, signed on December 25 and announced on Friday night by the U.S. Defense Department, “is an important step in improving the region’s security through a regional missile defense architecture,” Pentagon press secretary George Little said in a statement.

The U.S. Congress had been notified of the proposed sale in September 2008 by former President George W. Bush’s administration. At that time, the system built by Lockheed Martin Corp had been projected to involve more missiles, more “fire control” units, more radar sets, all at a cost roughly twice as much to UAE.

It marks the first foreign sale of the so-called Theater High Altitude Area Defense (THAAD), the only system designed to destroy short- and intermediate-range ballistic missiles both inside and outside the Earth’s atmosphere.

“Acquisition of this critical defense system will bolster the UAE’s air and missile defense capability and enhance the already robust ballistic missile defense cooperation between the United States and the UAE,” he said.

Lockheed Martin did not immediately respond to a request for its delivery timetable for THAAD, part of a layered bulwark being built by the Obama administration in Europe and the Middle East against Iran’s growing missile capabilities.

UAE lies across the Gulf from Iran. The announcement of its purchase underlined rising tensions since a November 8 report from the U.N. nuclear watchdog that Iran appears to have worked on designing a nuclear bomb and may still be pursuing research to that end.

Iran delayed promised long-range missile tests in the Gulf on Saturday and signaled it was ready for fresh talks on its disputed nuclear program.

Tehran on Tuesday threatened to stop the flow of oil through the Strait of Hormuz if it became the target of an oil embargo over its nuclear ambitions.

The THAAD follows a $1.7 billion direct commercial contract this year to upgrade Saudi Arabia’s Patriot antimissile missiles, and a sale this year of 209 advanced Patriot missiles to Kuwait, valued at roughly $900 million, the Defense Department said.

On Thursday, the Obama administration announced it had sealed a deal on December 24 to sell $29.4 billion in advanced Boeing Co F-15 fighter jets to Saudi Arabia, the priciest single U.S. arms sale yet.

The Saudi sale involves 84 new F-15SA models to be delivered starting in 2015 plus upgrades to 70 F-15s already in the Saudi fleet and new munitions. Congress had been notified of that deal in October 2010.

The ongoing U.S. buildup of Saudi Arabia as a counterweight to Iran is projected to total as much as $60 billion over 10 to 15 years, including the F-15s, three types of helicopters and advanced missiles, bombs and other hardware and services.

Saudi Arabia was the biggest buyer of U.S. arms from January 1, 2007 through the end of 2010, with signed agreements totaling $13.8 billion, followed by the United Arab Emirates, with $10.4 billion, according to a December 15 report by Congressional Research Service analyst Richard Grimmett.

In another pending arms sale to the region, the Obama administration formally proposed in November to sell 600 “bunker buster” bombs and other munitions to UAE in an estimated $304 million package to counter what the Pentagon called current and future regional threats.

Israel, the closest U.S. regional partner, is also being built up. It is to get Lockheed Martin’s new radar-evading F-35 Joint Strike Fighter jet, the first country in the region that will fly it. Israel views Iran’s nuclear program as a threat to its existence.

Dennis Cavin, a Lockheed vice president for missile defense programs, told Reuters in August that, in scaling back their planned THAAD purchase, UAE officials had identified some elements “that they think they can do without right now.”

Lockheed, the Pentagon’s No. 1 supplier by sales, is being awarded an initial U.S. government contract worth up to $1.96 billion for the two THAAD batteries under the government-to-government sale to UAE, the Defense Department said in its contract digest on Friday. It said the work was to be carried out through June 30, 2016.

Raytheon’s related deal is valued at up to $582.5 million for radars and services, with details expected to be finalized in June 2012, the digest said. It said Raytheon also was getting a Pentagon deal worth up to $363.9 million to start building two more AN/TPY-2 radar sets.

Lockheed Martin is pleased that the U.S. government and the United Arab Emirates have reached an agreement on the first foreign sale of the THAAD weapon system, Tom McGrath, a company vice president and program manager, said in a release.

“We look forward to working with our customers to deliver this important capability,” he said.