A. L. observers to ask Syria to remove snipers immediately 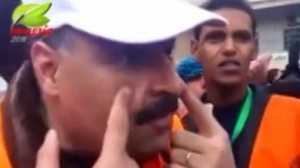 An Arab League observer has said he saw snipers in the Syrian city of Deraa, as protests against President Bashar al-Assad erupted across the country on Friday.

“We saw snipers in the town, we saw them with our own eyes,” the observer told residents in a conversation filmed and posted online.

“We’re going to ask the government to remove them immediately. We’ll be in touch with the Arab League back in Cairo. If the snipers are not gone in 24 hours, then there will be other measures taken.”

Activists said hundreds of thousands of people demonstrated across the country after noon Muslim prayers on Friday.

At least 35 people were reported killed, despite the presence of nearly 100 Arab League observers deployed to ensure the government complies with the terms of the league’s plan to end the bloody crackdown on dissent.

The orange-jacketed observers have been seen taking pictures of the destruction, visiting families of victims of the crackdown and taking notes.

They were within “hearing distance” from where troops opened fire on tens of thousands of protesters in the Damascus suburb of Douma, activist Salim al-Omar said. They later visited the wounded in hospital, he added.

Up to 100,000 people were reported to have protested in the suburb. In addition to tear gas, the Syrian Observatory of Human Rights said security forces used nail bombs against protesters.

Omar Hamza, a witness to the clashes between security forces and demonstrators in Douma, told Al Jazeera that government forces shot at protesters who gathered at a mosque in the city, injuring at least 100 people.

The Arab League observers began their mission on Tuesday in Homs, the city which has born the brunt of the violence.

Since then, they have fanned out in small groups across Syrian provinces, including the restive Idlib province in the north, Hama in the centre, and the southern province of Deraa, where the revolt began.

But activists say attacks on protesters have continued despite the presence of monitors.

The Local Co-ordination Committees, an activist network, said at least 130 people, including six children, have been killed since the Arab League observers began their one-month mission.

Al Jazeera’s Dorsa Jabbari, reporting from Beirut, said protesters were eager to show the observers the situation on the ground and have their stories heard, but some residents were more hesitant to speak.

“[The observers] are being followed by Syrian forces as part of the agreement, so they are responsible for their safety,” she said. “So some residents don’t feel they have the freedom to speak in front of Syrian authorities in front of the observers.”

The opposition has condemned the observers’ presence as a farce to enable Assad to buy time and avoid more international censure and sanctions.

Activists doubt they are getting the access they need to be able to give a fair assessment of the violence that the UN estimates has left more than 5,000 people dead since protests began in March.

Speaking to Al Jazeera, Hadi Abdullah, an activist in Homs, said that monitors witnessed the crackdown on protests, but he was suspicious on how they would report it.

“The observers saw a lot of violence in the city. They saw how security forces shoot at protests. They also saw the bodies of dead people,” Abdullah said.

“The monitors also saw destruction in the city. One of the observers asked residents of Bab Amr neighbourhood ‘How can you live in this place?'”

The Arab League plan, endorsed by Syria on November 2, calls for the withdrawal of the military from towns and residential districts, a halt to violence against civilians and the release of detainees.

The Syrian government says most of the violence has been perpetrated by “armed terrorist groups” that are working against the government.

As the violence showed no signs of abating, Philippine Foreign Secretary Albert del Rosario said he would he would fly to Syria to oversee the evacuation of thousands of Filipino workers.

Del Rosario said he planned to leave on Saturday to seek the help of Syrian officials in ensuring the safety of more than 4,000 Filipinos and get their assistance to immediately evacuate them.