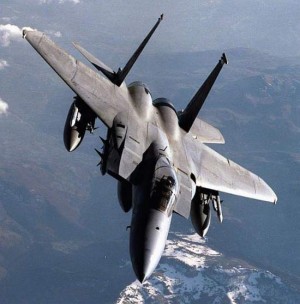 The sale of $30 billion worth of F-15SA fighter jets to Saudi Arabia has been finalized, boosting the military strength of a key U.S. ally in the Middle East to help counter Iran, the Obama administration announced Thursday.

Under the agreement, the U.S. will send Saudi Arabia 84 new fighter jets and upgrades for 70 more. Production of the aircraft, which will be manufactured by Boeing Co., will support 50,000 jobs and have a $3.5 billion annual economic impact in the U.S., the White House said.

The sale is part of a larger U.S. effort to realign its defense policies in the Persian Gulf to keep Iran in check. The announcement came as U.S. officials weighed a fresh threat from Tehran, which warned this week it could disrupt traffic through the Strait of Hormuz, a vital Persian Gulf oil transport route, if Washington levies new sanctions targeting Iran’s crude exports.

Administration officials said the timing of Thursday’s announcement was not tied to the new threat from Tehran. But they did make clear that the fighter jet sale would help Saudi Arabia counter potential troubles with Iran.

“This sale will send a strong message to countries in the region that the United States is committed to stability in the Gulf and broader Middle East,” said U.S. Assistant Secretary of State Andrew Shapiro. “It will enhance Saudi Arabia’s ability to deter and defend against external threats to its sovereignty.”

The fighter jet sale is part of a larger 10-year, $60 billion arms deal with Saudi Arabia that also includes helicopters, a broad array of missiles, bombs and delivery systems, as well as radar warning systems and night-vision goggles. Congress gave the deal the go-ahead about a year ago.

The plan initially raised concerns from pro-Israeli lawmakers, but U.S. officials reassured Congress that Israel’s military edge would not be undercut by the sale. Additionally, there is now broad agreement among Israel, the Gulf Arab states and the West that Iran poses a significant and unpredictable threat.

Saudi Arabia and Iran are bitter regional rivals. Tensions between them were further stoked earlier this year after the U.S. accused Iran of plotting to assassinate the Saudi ambassador to the U.S. in Washington.

Saudi Arabia is already the most militarily advanced of the Arab Gulf states, one of the richest countries in the world, and central to American policy in the Middle East. It is also vital to U.S. energy security, with Saudi Arabia ranking as the third-largest source of U.S. oil imports.

But relations between the U.S. and Saudi Arabia grew frosty earlier this year, as the allies found themselves at odds during the protests that swept through the Arab world. The Obama administration angered the Saudis by pulling support from former Egyptian leader Hosni Mubarak, a longtime ally of both countries. And the U.S. bristled when Saudi Arabia sent troops into Bahrain to quell protests there.

The White House announced the agreement with Saudi Arabia from Hawaii, where President Barack Obama is vacationing.