Death toll rises to 41 in Syria despite AL mission 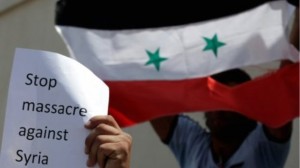 The death in Syria has risen to 41 , Al Arabiya TV reported on Thursday, despite the Arab League monitoring mission aimed at ending the bloodshed

In a related development a Member of the General Secretariat of the Syrian National Council (SNC), Imad al-Deen al-Rashid slammed the Arab League monitoring mission during an interview with Future News television

The opposition has called on the Arab observers “to leave Syria because they did not offer any guarantees to the Syrian people who are being killed before their eyes.” He added

“The head of the [Arab mission on Wednesday] stepped in puddles of blood in Homs, [but] said that the situation [there] was reassuring,” Rashid continued

His comments come after Arab League mission chief General Mohammad Ahmad Mustafa al-Dabi , a Sudanese said Wednesday that the visit to Homs had been “good”.