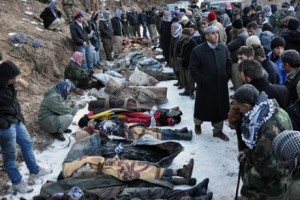 A Turkish airstrike on the border with Iraq killed 35 people who are now thought to have been smuggling cigarettes, a senior Turkish lawmaker said Thursday.

Turkish air force jets launched the strike late Wednesday after unmanned aerial vehicles showed a group moving from Iraq toward the border with Turkey in an area “mostly used by terrorists,” a statement from the military general staff said.

But a senior member of Turkey’s governing Justice and Development Party (AKP) said early indications are that those identified by the drones and subsequently killed were civilians.

“These people were thought to be terrorists; however, the first initial investigative information we have from the local authorities, especially from Sirnak Governor’s office, indicate that these people are involved in cigarette smuggling,” said the AKP’s deputy chairman and spokesman Huseyin Celik.

He said the strike had killed many members of the same family.

Expressing his condolences to the affected families, he vowed that a full investigation would be carried out and no cover-up would be allowed.

A local official in Turkey’s southeastern province of Sirnak earlier said the airstrike had killed at least 31 Kurdish villagers.

“A group of villagers were coming from northern Iraq across the border after 9:30 p.m. Their path was blocked by soldiers and then four planes bombed them,” said the official, Yunus Urek of the pro-Kurdish Peace and Democracy Party.

The incident occurred in a region where there is a large Kurdish population. The people were from the border villages of Ortasu and Gulyazi, according to Urek, who said he was in Ortasu.

Urek said the victims frequently cross the border “for their daily needs like sugar or fuel.” He said one person survived the strike.

Turkish authorities said an administrative and legal investigation was under way.

“Since the area where the group was located was often used by terrorists and a movement towards our border was determined, it was evaluated that the area should be held under fire by air force planes,” the Turkish military said in a statement released Thursday.

The military statement claimed the the strike was in the Sinat-Haftanin area of northern Iraq, where many militant training camps are situated and there are no civilian settlements.

Vahdettin Ozkan, the governor of Turkey’s southeastern province of Sirnak, also said a full investigation is under way.

“A crisis center has been set up at the governor’s office, and prosecutors and security forces have been sent to the region,” he told Turkey’s Anadolu news agency.

Some observers have sounded the alarm in recent months about escalating tension between Turkey and its Kurdish minority, warning it may reignite a conflict that has simmered since 1984 and claimed more than 30,000 lives.

Turkey has been going on the offensive against Kurdish separatists based across its border in northern Iraq with bombings and incursions.

In October, an attack killed 24 Turkish soldiers in the southeastern section of the country, where Turkey borders Iraq. The Turkish government blamed terrorists for that attack, and the United States pinned responsibility for the attack on militants from a Kurdish separatist group, the Kurdistan Workers Party, or PKK.

Earlier this month, Turkish police detained dozens of people in a wave of raids focused on pro-Kurdish media organizations.

The Kurds represent the largest ethnic minority in Turkey. For decades, they were the target of repressive government policies, implemented by officials who sometimes referred to them as “mountain Turks.”

Photo: People look at bodies lying on the ground after Turkey’s air force attacked suspected Kurdish rebel targets across the border in Iraq, killing some tens of people, many of them believed to be smugglers mistaken for guerrillas, near the Turkish village of Ortasu in Sirnak, Turkey, Thursday, Dec. 29. 2011. The Turkish military confirmed the Wednesday night raids, but said its jets struck an area of northern Iraq that is frequently used by Kurdish rebels to enter Turkey, after drones detected a group approaching Turkey’s border.(AP Photo) (Credit: AP)