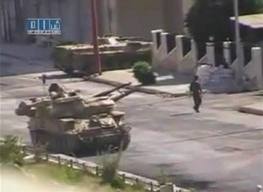 At least 20,000 people protested in Homs on Tuesday against Syrian President Bashar al-Assad as Arab League peace monitors began to tour the flashpoint city and the army withdrew some tanks following battles that killed 34 people.

The observers want to determine if Assad is keeping his promise to implement a peace plan to end his uncompromising crackdown on nine months of revolt that has generated an armed uprising, edging the country towards civil war.

Activist reports just before the monitors arrived said up to a dozen tanks were seen leaving Baba Amr, one of Homs’s most embattled neighborhoods, but others were being hidden.

“My house is on the eastern entrance of Baba Amr. I saw at least six tanks leave the neighborhood at around 8 in the morning (0600 GMT),” Mohamed Saleh told Reuters by telephone. “I do not know if more remain in the area.”

The opposition Syrian Observatory for Human Rights, relaying activist reports from its base in Britain, said protesters had gathered in Khalidiya, one of four districts where there has been bloodshed as rebels fight security forces using tanks.

Activists say they want to impress on the Arab League mission that it must not let its teams be hoodwinked by the state and be shown places where life is relatively normal.

As the monitors arrived, tanks were seen leaving the Baba Amr district which activists say was pounded for the past four days. Hundreds have been killed in Homs in the revolt. The United Nations says at least 5,000 have been killed in Syria since protests began in March.

Assad is internationally isolated. Western powers and his neighbors Turkey and Jordan have called on him to step down, ending a 41-year-old family power dynasty. He says he is fighting Islamist terrorism steered from abroad.

On the border with Turkey, Syrian forces killed several men from an “armed terrorist group” trying to cross into Syria, the state news agency SANA said on Tuesday.

The northern border has become the route of choice for infiltration by army defectors fighting to topple Assad.

“Special forces were able to kill and wound several gunmen and seized some weapons, ammunition, army uniforms, communication tools and fake identity cards,” SANA said. It did not give a specific casualty count.

SANA also reported that said “an armed terrorist group targeted and sabotaged a gas pipeline near Rastan in Homs province” on Tuesday.

The pipeline has been attacked several times in recent months and has come back into operation after outages each time.

The monitors started by meeting the governor of Homs, Syria’s Dunia television channel said. An Arab League source said they intended to tell him where they wanted to go, based on requests from people in Homs who have witnessed the violence.

Dunia showed no footage of the monitors. Syria has barred most foreign journalists from the country, making it hard to verify reports of events on the ground.

At least 34 people were killed in Homs on Monday as tanks fired at targets among apartment blocks.

Amateur video recorded by activists on Monday and posted on the Internet showed tanks prowling around Baba Amr, firing at unseen targets. Video showed gruesome pictures of mangled bodies in the wreckage of building that bore the signs of shelling.

Assad’s opponents fear that the monitors – who arrived in the country on Monday after weeks of negotiations with Arab states – will be used as a cloak of respectability for a government that will hide the extent of violence.

They say tanks have been withdrawn before from restive cities such as Deraa and Hama, only to return later.

Syria stalled the Arab League for months before accepting the monitoring mission, the first significant international intervention on the ground since the start of the popular revolt inspired by Arab pro-democracy uprisings this year.

The Arab mission, led by Sudanese General Mustafa Dabi, is starting with 50 monitors who arrived in Damascus on Monday and will be split into five teams of ten. About 100 more monitors are to follow soon.

The teams will use government transport, according to Dabi. But that arrangement likely to fuel charges by the anti-Assad opposition that the monitoring mission will be impeded and hoodwinked from the outset.

Arab League delegates insist the mission will nevertheless maintain the “element of surprise” and be able to go wherever it chooses with no notice.

In Baba Amr, activist video showed bodies shattered like rag dolls and buildings smashed as if by heavy weapons. The video images were impossible to verify but hard to fake.

Armed insurgency is eclipsing civilian protest in Syria. Many fear a slide to sectarian war between the Sunni Muslim majority, the driving force of the protest movement, and minorities that have mostly stayed loyal to the government, particularly the Alawite sect to which Assad belongs.

Analysts say the Arab League is anxious to avoid civil war. Western powers have shown no desire to intervene militarily in a volatile neighborhood of Middle East conflict, and the United Nations Security Council is split.

Assad’s opponents appear divided on aims and tactics. He retains strong support in important areas — including Damascus and the second city Aleppo — of the country, and maintains an anti-Israel alliance with Iran.

Fighting in Homs has intensified since a double suicide bombing in Damascus on Friday that killed 44 people.

At least ten army defectors were killed in fighting with security forces in the suburb of Douma outside Damascus, according to the British-based Observatory.

“The violence is definitely two-sided,” said a Homs resident who gave his name only as Mohammed to protect his safety. “I’ve been seeing ambulances filled with wounded soldiers passing by my window in the past days. They’re getting shot somehow.”

Parts of Homs are defended by the Free Syrian Army, made up of defectors from the regular armed forces, who say they have tried to protect civilians.